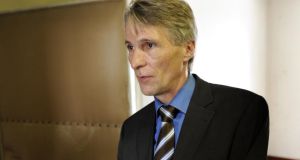 A former agent in East Germany’s secret police, the Stasi, has praised NSA whistleblower Edward Snowden as a “hero” and dismissed as “hypocritical” espionage charges filed against him by the US government. Fallout from the Snowden affair has brought a rare, if odd, moment of unity between former Stasi officials and many of their harshest critics.

“Compared to NSA surveillance today, what we did was like a children’s game,” said Gotthold Schramm, a 71-year-old former agent for East Germany’s ministry for state security, told The Irish Times. Mr Schramm spent all but two of his 39 years with the Stasi in the foreign intelligence department, often working closely with spy master Markus Wolf. He said it is “naive” to think any secret service will not exhaust the technical possibilities for surveillance each age presents.

Former Stasi chief Erich Mielke would, he says, have been “delighted” to use the spying opportunities presented by today’s digital world. Claims this week that the US secret services each month collate data on half a billion German emails, phone calls and texts have prompted outraged reaction from German politicians.

High-level meeting
Chancellor Angela Merkel spoke by telephone with US president Barack Obama on the claims yesterday and the two agreed for their officials to hold a high-level meeting in the coming days.

Yesterday Mr Schramm warned that the Stasi, like the East German state it served as “sword and shield”, was eventually brought down – rightly, in his opinion – by widespread abuse of powers and disregard for human rights. That, he said, should serve as a lesson to governments everywhere. “Surveillance is surveillance no matter who does is and it is legitimate if controlled, but something on this scale is hypocritical,” said Mr Schramm, author of a new book about Germany’s BND secret service and its new Berlin headquarters.

“Snowden is a hero in my book for reporting abuses. The campaign against him contradicts the foundations of democracy.”

Snowden is also a hero, too, for Dr Hubertus Knabe, the high-profile director of the Berlin’s Stasi prison memorial. The 54-year-old historian is one of the leading experts of the Stasi and highly critical of active ex-Stasi officials who, in his view, attempt to whitewash the GDR’s record of state repression.

On the NSA whistleblower affair, however, he agrees with Mr Schramm. “I have great respect for people like Snowden who put their own existence on the line when they see something wrong happening,” said Dr Knabe. He has noted a more moderate and less hysterical response to the NSA revelations than other debates on the heated issue of data privacy in years gone by, coloured by fresher memories of the Gestapo and Stasi.

The high-water mark for this was West Germany’s “transparent citizen” scare of the 1980s, prompting a successful campaign to halt a census planned in 1983.

“At the time people gave the impression that filling in a questionnaire was somehow the end of democracy because the state would know everything about them,” recalls Dr Knabe.

As the fear of dictatorship and an all-seeing state recedes, and sharing information on social media becomes the new norm, the historians suggest a more relaxed reality has established itself in many German minds.

“I have the impression that the majority of Germans are getting used to not living in a dictatorship anymore and not having any worry that emails are being read by secret services and that you can be picked up next week as a result,” Dr Knabe said.

“On the other hand you could say, as a result of the recent revelations, that Germans are perhaps feeling a little too secure and have shed their awareness for these matters. After the experience with two surveillance states, it’s not always good when you close both eyes to far-reaching state activities that might only be semi-legal.”

That is the accusation levelled at new laws, in effect since Monday, allowing German police and intelligence service access citizens’ so-called “inventory data” such as name, address, bank pin numbers and and internet IP address.

“What bothers me is this growing ‘vacuum cleaner mentality’, sucking up everything just because it is technically possible,” said Peter Schaar, federal data protection commissioner.

For now, the wave of protest by Germans at alleged NSA surveillance of their emails and phone calls appears to be contained online. This modern form of internet dissent is one for which Germans have adopted the anglicism shitstorm – this week given a place of honour in the German language by entering the latest edition of the Duden dictionary.