Earthquake: Can infrastructure be improved before next big one? 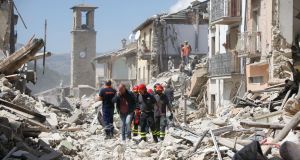 Rescue workers search for survivors in the rubble of Amatrice, Italy, on Wednesday. Photographer: Alessia Pierdomenico/Bloomberg 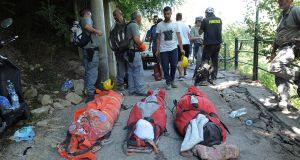 Bodies of victims lie in front of rescuers in the central Italian town of Pescara del Tronto on Wednesday. Photograph: Marco Zeppetella/AFP/Getty Images

Central Italy is one of the most active earthquake zones in world, with tremors regularly shaking the country’s mountainous backbone.

Most of the quakes are so negligible they are barely felt in the centuries-old communities that dot the landscape, registering only on electronic sensors – but that was not the case on Wednesday.

With other such disasters seen as inevitable in the future, experts say Italy could do more to protect life and property.

“Italy can expect an earthquake with a magnitude above 6.3 every 15 years on average. That should encourage a greater culture of seismic prevention and civil protection,” said Fabio Tortorici, head of studies at Italy’s Geological Institute.

“The Apennine mountain belt, which runs down the spine of Italy, is gradually being stretched in a northeast-southwest direction by tectonic forces at a rate of around 3mm per year,” said Richard Walters, a lecturer in earth sciences at Britain’s Durham University.

“This slow stretching causes stress to build up in the Earth’s crust, which is then released in earthquakes just like this one.”

It was the most destructive disaster in Italy since 2009, when a quake killed more than 300 people, left 55,000 homeless and devastated the 13th-century city of L’Aquila.

That tragedy again revealed the fragility of Italy’s infrastructure, with both modern and ancient buildings, including hospitals, churches and a college dormitory ravaged by the shaking earth.

A 2008 survey by civil protection experts found that only 14 per cent of buildings in the most vulnerable swathe of Italy met seismic-safety standards.

The same year, new norms were brought in demanding a much higher standard of construction for new buildings. But that still left most homes and offices exposed to seismic activity.

“Some things have changed, but more could be done,” said Mr Tortorici. “The real problem lies with properties built before the 1970s, when there were zero earthquake norms. The country was covered in cement, which has a very finite life.”

Any measures to strengthen older buildings and make them safer would meet fierce resistance, given the huge cost of reinforcing medieval hamlets and Renaissance palaces without stripping them of their charm.

Surrounded by rubble in the village of Arquata del Tronto, Altiero Cinaglia (65) was fatalistic about Japanese-style safety standards in creaking Italy.

“What are we supposed to do?” he asked. “You can’t tear down all the old buildings for new ones. These towns live for tourism in the summertime, and tourists want to see the old beautiful buildings.” – (Reuters)