Eagles of Death Metal return to Paris with U2

On Sunday December 6th, U2 paid tribute to the victims of the Paris attacks when playing a concert in the city - two concerts in Paris had been canceled following the shootings. Pics: U2 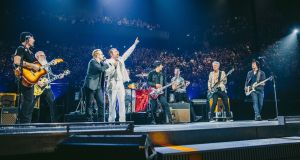 Bono (third from left) and Jesse Hughes (4th from left), the Eagles of Death Metal singer performing with their bands at the packed 16,000-seat AccorHotels Arena in Paris on Monday night. Photograph: Danny North/AFP/Getty Images

Eagles of Death Metal, the California rock band that was onstage at the Bataclan in Paris when assailants opened fire on the crowd last month, returned to Paris on Monday night, playing with U2 near the end of its show at an arena a few miles from the Bataclan.

“There’s nothing left but to introduce you to some people whose lives will forever be a part of the life of Paris,” Bono said of Eagles of Death Metal. “These are our brothers. They were robbed of their stage three weeks ago, and we would like to offer them ours tonight.”

The bands, performing at the AccorHotels Arena, then joined together in a rendition of Patti Smith’s People Have the Power, which Smith performed with U2 on the same stage Sunday night.

U2 then left the stage to Eagles of Death Metal for a performance of its song I Love You All the Time. After the terrorist attacks in Paris, the group called on musicians of all genres to cover the track, from its album Zipper Down, promising to donate the proceeds to victims of the attacks.

Eagles of Death Metal with U2 in Paris

Monday’s U2 concert was one of two originally scheduled for November 14th and 15th that were postponed after the attack. The shows are the biggest concerts in Paris since the November 13th tragedy.

Eighty-nine people were killed at the Bataclan concert hall, part of co-ordinated terrorist attacks in Paris that left 130 people dead. The members of Eagles of Death Metal escaped, although Nick Alexander, the band’s merchandise manager, was killed.

“We felt the biggest and the only real contribution we can make at a moment like that is to honor the people of Paris, who brought us the concept of liberté, egalité, fraternité,” Bono said in an interview. “Isis and these kinds of extremists are a death cult. We’re a life cult.”

Hughes, Eagles of Death Metal’s singer, said in an interview with Vice last month, in his first comments since the attack, that he was ready to perform again.

“I cannot wait to get back to Paris,” he said. “I cannot wait to play. I want to come back. I want to be the first band to play in the Bataclan when it comes back up. Because I was there when it went silent for a minute. Our friends went there to see rock ‘n’ roll and died. I want to go back there and live.”