Dutch submarine driven away by Russian destroyers in Mediterranean 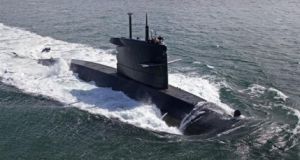 Shadowing Russian warships? A Walrus-class submarine of the type deployed by the Dutch navy

Russian warships in the eastern Mediterranean Sea have driven away a Dutch submarine shadowing the squadron, the military said.

The destroyers had tracked the submarine for more than an hour, using anti-submarine helicopters, before forcing it to leave the area, he said.

The spokesman added that such “clumsy” attempts to manoeuvre close to the Russian squadron could have resulted in an accident.

A Nato official said the alliance’s navies have been monitoring the Russian fleet in recent weeks in a “measured and responsible way, as is customary”. He refused to elaborate on how Nato was doing that.

The Admiral Kuznetsov aircraft carrier is being accompanied by the nuclear-powered Peter the Great missile cruiser and several other ships on a mission to Syria’s shores, the Russian navy’s largest deployment since the collapse of the Soviet Union in 1991.

Nato has expressed concern, saying the move could presage an increase in the number of Russian air raids in Syria, particularly around the besieged city of Aleppo.