Dutch master of diplomacy back from Africa to head ministry 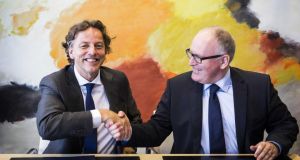 You probably won’t have heard of Bert Koenders, which is typical of the man. Until last week he was the United Nations chief of mission in Mali, so well regarded that his departure was described by diplomats as a serious blow to the west African country at a time of growing instability.

The 56-year-old economist had been making quite a name for himself inside the corridors of the UN, first as the secretary general’s special representative to Côte d’Ivoire between 2011 and 2013, and subsequently in Mali’s teeming capital, Bamako, where he has lived for the past 12 months.

His colleagues must have seen him at first as every inch the bland administrator: a former Dutch development minister with a master’s degree in international studies from Johns Hopkins University – not to mention a former boy scout from a conservative Protestant background. And yet Koenders has a habit of surprising. He becomes very hands-on very quickly.

Which is why, when charged with the arguably impossible job of stabilising the vast desert region of northern Mali after French troops apparently drove out al-Qaeda in the Islamic Maghreb (Aqim) last year, he wanted to do more than simply manage the status quo.

Within months he had become deeply involved in helping to broker peace talks hosted by Mali’s northern neighbour, Algeria, between the government in Bamako and Tuareg rebels who had begun to distance themselves from more extreme jihadist groups. The strategic aim – to undermine Aqim.

“The Algerians are firmly taking the lead in those talks,” said one Bamako-based diplomat who laments his departure, “but Koenders was certainly the next most important figure among the coalition of mediators.”

If this is surprising, what was even more surprising was that rather than simply advocating a new political consensus in a conflict in which 31 UN troops have been killed since 2013, Koenders emerged as equally skilled in wielding the carrot and the stick.

While supporting talks, he was also the single most persuasive voice in convincing his government to send some 450 Special Forces – whose motto, by the way, is Nunc aut Nunquam, Now or Never – to Mali, along with intelligence officers and attack helicopters, to bolster the UN mission.

So nunc aut nunquam may well have been Koenders’s own murmured response when he took the confidential call a few weeks ago offering him the top job as the Netherlands foreign minister in what’s known as “Rutte II” – the second Mark Rutte Liberal-Labour coalition cabinet.

Perhaps pondering for a few moments where his UN trajectory might have led him, he accepted the invitation to replace Frans Timmermans, who is moving on to take up the wonderfully named post of first vice-president of the new European Commission led by Jean-Claude Juncker, starting on November 1st.

In Bamako, Koenders’s role in the peace talks will be filled, for better or for worse, by his former deputy Arnauld Akodjènou, a UN career diplomat from Benin with a PhD in political science who joined the office of the High Commissioner for Refugees in 1986.

Both were appointed to the foreign ministry by Mark Rutte. Indeed friends say that perhaps the only ministry that would have attracted Koenders enough to bring him home was foreign affairs, while that always seemed a likely destination too for Timmermans given his fluent Russian.

What Koenders will certainly want to avoid is ending his term as Timmermans did. Appearing on a TV current affairs programme a couple of weeks ago, Timmermans revealed in answer to a question about the downing of Malaysia Airlines flight MH17 that one of the passengers had been found wearing an oxygen mask, illustrating that there had been time to deploy it before the missile hit.

Relatives of the dead were outraged that this crucial detail had been kept from them. The minister, who had always been so sure-footed, apologised hours later for the upset he had caused. And the truth was now in the public domain.