Dutch await what they feel will be inevitable terrorist attack

In the Netherlands, there is a widespread fatalism that any day now, ‘we could be next’ 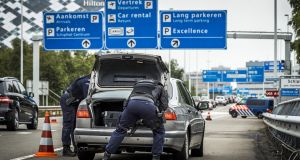 The chaos at Schiphol Airport outside Amsterdam for the past fortnight told us much of what we need to know about the security challenges facing European governments as long as the threat posed by the Islamic State terror group and its followers remains live.

The airport authorities decided on Friday to scale back the high-profile precautions put in place at the start of August – the busiest period of the year – after the intelligence services intercepted an unspecified “signal” indicating that the terminal could be a terrorist target.

That signal left prime minister Mark Rutte and his ministers in a classic no-win situation – facing the kind of choice that all too often goes hand-in-hand with high office, but that afterwards no doubt keeps many of those involved awake at night.

They could go public immediately, take appropriate action to safeguard the 200,000-plus passengers who use the airport every day at the height of summer – and suffer the inevitable flak over disruption and the occasional missed flight.

Or they could keep the information under their hats, initially at least, in the hope of more or better intelligence, increasing surveillance but acting only when there was no doubt that the threat was both genuine and imminent.

That they chose the former – alerting holidaymakers to the potential danger they and their families faced at the airport, while deploying elite troops such as the 11th Air Assault Brigade – shows just how seriously they took the threat of a Brussels-style attack using “small-calibre weapons”.

On the other hand, as politicians and airport officials sat down with security experts to take that decision, the scene had, to an extent, already been set by Islamist militant attacks against three neighbours, France, Belgium and Germany.

With the terror threat at “substantial”, its second-highest level, the Dutch authorities have acknowledged that the Netherlands is inevitably a target because it supports US-led military operations against Islamic State – also known as Isis – in the Middle East.

“Paris, Brussels, Orlando, Istanbul – these are all attacks, we can easily imagine happening here,” the National Counter-terrorism co-ordinator, Dick Schoof, said recently. He said that of the 260 Dutch would-be jihadists who had travelled to Iraq and Syria since 2012, 170 were known to be still there, 42 were known to have been killed and 40 had returned to the Netherlands, many of them battle-hardened and some perhaps psychiatrically unstable as a result.

So while it is frequently observed that the last Islamist attack here was more than a decade ago, when filmmaker Theo van Gogh was stabbed to death by Mohammed Bouyeri, a member of the radical Hofstad Network, there is also a widespread fatalism that, any day now, “we could be next”.

What is instructive, too, is how relatively quickly the climate of co-operation changed after the government deployed armed troops on random stop-and-search patrols inside and outside the terminal and public patience began – as it inevitably will – to wear thin.

After a week of tension during which – happily – there was no attack, opposition parties began to challenge Rutte over his use of the army in support of the military police, who usually provide security at the airport, describing it as “unacceptable” because it was not “a structural solution”.

Conscious that their “territory” was being trespassed upon, the military police themselves then weighed in, dismissing the troops as “a cobbled-together solution”. They said that although their usual complement of 1,800 was due to increase by 400 already in training, security levels would only reach the desired level for Schiphol in mid-2017 – a revelation that seemed, at best, indiscreet.

In the end, the Schiphol threat was plausible because it was very much in line with the lengthening list of threats and attacks in western Europe, on airports, railway stations and shopping centres.

This “familiarity” has resulted in what one Dutch expert describes as “a heightened general threat” – a sense of expectation that is based on rational likelihood rather than on imminent danger, which is why the terror threat has not risen from its second-highest level.

While Islamic State and its “lone wolves” remain a threat there is no option but to live with; this is the new normal.