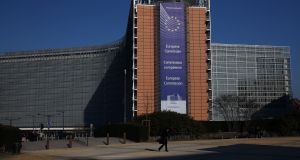 The European Commission headquarters building ahead of the EU–Turkey Summit. Photograph: Getty

The European Union’s summit chairman said on Thursday he was “more cautious than optimistic” about the chances of reaching a deal with Turkey this week to halt an influx of migrants that has caused a divisive backlash in Europe.

Hours before EU leaders meet to try to agree on financial and political rewards to offer Turkey in return for a commitment to take back all migrants who cross from its shores to Greece, European Council president Donald Tusk sounded downbeat.

“The agreement must be acceptable to all 28 member states, no matter big or small,” he told a news conference in a clear reference to Cyprus’ objections to accelerating Turkey’s EU membership talks until Ankara fulfills past obligations.

After a year in which more than a million people have arrived in Europe in chaotic misery, fleeing war and poverty in the Middle East and beyond, EU countries are looking desperately to Turkey to seal its coastline and stem the flow.

Tusk forecast difficult talks, saying any deal must fully comply with European and international law, which has been challenged by UN agencies and rights groups, and must effectively help solve the migration crisis.

In Ankara, a senior Turkish official said countries like Cyprus should not be allowed to block progress, adding that Mr Tusk’s pre-summit visit to Ankara on Tuesday had not fully resolved issues over the proposed pact.

Turkey does not intend to make new demands or proposals when prime minister Ahmet Davutoglu meets the EU leaders on Friday, the official said, appearing to rule out any goodwill gesture to break the standoff with Cyprus.

“I don’t think anyone is certain there will be a deal,” an EU diplomat in Brussels said.

A draft agreement circulated by Mr Tusk and debated by EU ambassadors on Wednesday evening watered down two key inducements to Turkey and included new safeguards intended to overcome legal objections to sending back migrants.

Ankara’s key objective of securing visa-free travel for Turks to Europe by June will depend on it meeting a raft of long-standing criteria.

After discussing the economy, the 28 EU national leaders will debate the detailed terms to offer Turkey over dinner.

Mr Davutoglu is due to join the EU leaders for a breakfast on Friday, at which Tusk hopes to finalise a deal which the Turkish premier first sprang on a surprised EU with backing from German chancellor Angela Merkel at a special summit 10 days ago.

Under the plan, Turkey would take back all those, including Syrian refugees, who cross from its shores to Greek islands. The EU would double an agreed 3 billion euro fund to help refugees in Turkey and would hasten visa-free travel for Turks in Europe.

The draft, seen by Reuters, says the aim is “to break the business model of the smugglers and to offer migrants an alternative to putting their lives at risk. It stresses the return is “a temporary and extraordinary measure which is necessary to end the human suffering and restore public order”.

Potentially the most explosive topic, which diplomats say risks derailing the deal, will be how Mr Davutoglu responds to a vague offer to open new “chapters” of Turkey’s snail-like negotiations to join the EU in the distant future.

Cyprus has long blocked several over Turkey’s refusal to give it the same access to Turkish ports and airports as other EU states enjoy – a result of the 42-year dispute since the violent partition of the island into a Greek-speaking state and a Turkish-speaking north recognised only by Turkey.

Cypriot president Nicos Anastasiades has made clear he will lift his veto on Turkish accession chapters only if Ankara ends its refusal to recognise Cyprus.

Turkey wants concessions for its northern Cypriot allies in return. The EU and world powers are keen not to derail UN-led talks that could reunite the island this year.

Tusk’s draft said only that the EU would work with Turkey to “prepare for a decision” on opening new accession chapters “as soon as possible” – a hazy prospect Mr Davutoglu may not accept.

To satisfy EU and international law, Greece and Turkey will have to modify domestic legislation so that Turkey is regarded as protecting asylum seekers in line with the Geneva Convention, even though Ankara limits its formal commitments to that treaty. All those who reach Greece would have a right to put their case for asylum and to appeal against deportation.

EU officials argue that the alternative to holding people back in Turkey is to see a further build-up of migrants stranded in worsening conditions in Greece, whose European neighbours have closed their borders. Already over 40,000 are marooned.