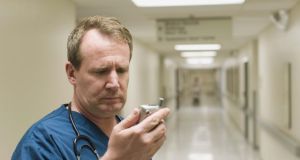 Doctors’ smartphones have been identified as a new source of potentially fatal hospital infections, including MRSA

Medical researchers in the Netherlands have identified doctors’ smartphones as a new source of potentially fatal hospital infections, including MRSA – and a source for which there are currently no disease control protocols.

A team from the VU (Free University) Medical Centre in Amsterdam carried out studies in eight separate Dutch hospitals and found that while 80 per cent of doctors carried smartphones, 57 per cent also used them while treating patients, without thinking of hygiene considerations.

The findings, published in the journal Medisch Contact, which aims to keep doctors in touch with cutting-edge academic research, showed that of 989 smartphones tested, between 42 per cent and 95 per cent were found to be infected with nosocomial or healthcare-related bacteria.

Even more worrying was the finding that in five of the eight studies, smartphones were found to be carrying antibiotic-resistant bacteria, such as the hospital “superbug” MRSA, which in vulnerable patients can lead to life-threatening infections, such as blood poisoning or endocarditis.

The problem, said VU postgraduate researcher Stijn Voeten, was that while watches, rings and long sleeves were already banned because of their hygiene risks, in order to be contactable hospital doctors carried their smartphones literally everywhere, including into unhygienic areas. “Even so, there are no disease control protocols covering these phones. They are being relied upon more and more so banning them is not feasible, and as a result they have become an uncontrolled source of bacteria”, said Mr Voeten.

The Dutch research findings – effectively illustrating for the first time the likelihood that many doctors are helping to infect their own patients by failing to take adequate hygiene precautions – has the potential to change attitudes to smartphone hygiene the world over.

Mr Voeten said: “The phones themselves should be covered in a protective film which can be disinfected. It’s that simple.”