Do not sacrifice workers’ benefits to help Cameron – Podemos 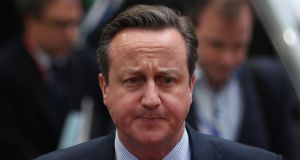 “It’s good thing that they are holding a referendum,” said Pablo Bustinduy, head of foreign affairs at Podemos. “It is not a very good idea is basically to change the rules concerning the social rights, concerning the core of the project of peace, fraternity and solidarity in our nations, which is at the core of the European Union, only for internal political reasons in one country.”

Podemos came third in Spain’s December election with 69 seats in the 350-strong parliament and has been calling on the second-placed Socialists, with 90 lawmakers, to join a progressive coalition to oust acting prime minister Mariano Rajoy’s People’s Party.

Of the 200,000 Spanish workers living in the UK, only about 2,000 are receiving benefits, said Mr Bustinduy. “It’s not a problem of sustainability, it’s a problem of solidarity,” he said. “It’s a problem, also, to set the precedent of discrimination among workers depending on the country origin.”

Mr Bustinduy said he is also opposed to Mr Cameron’s demands that London banks be given more leeway within the EU’s financial regulations. He said the wide ramifications of financial turmoil in the City mean that the UK should submit to oversight.

“The consequences of the problems in the City of London are felt through the whole European Union,” said Mr Bustinduy. “Not having any possibility for those affected by what happens there to have a say about what happens, that’s a problem for sure.” – (Bloomberg)