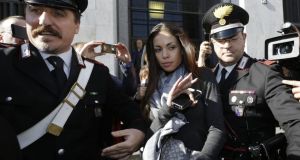 Silvio Berlusconi is accused of involvement in “underage prostitution” and “abuse of office” relative to his relationship with 20-year-old Moroccan Kharima “Ruby” El Mahroug (above). Photograph: Luca Bruno/AP Photo

Mr Ghedini made his comments during his summing-up for the defence at the end of the “Rubygate” trial in which his client stands accused of involvement in “underage prostitution” and “abuse of office” relative to his relationship with Moroccan Kharima “Ruby” El Mahroug (20).

Mr Ghedini, who is a deputy in the Berlusconi PDL party, called for the acquittal of his client, arguing that much of the prosecution’s evidence had been contradicted by defence witnesses. He said the request earlier this month from state prosecutor Ilda Boccassini that the court sentence Mr Berlusconi to six years in prison and ban him permanently from public office “owed more to speculation than to trial evidence and was based on a prejudice vis a vis the defendant”.

Mr Ghedini was also critical of the three (women) judges, opening his defence statement by saying: “Throughout this trial we have had the impression that the defence team represents a major annoyance . . . However, we note that the public prosecution does not engender the same annoyance . . .”

With regard to the two specific charges against Mr Berlusconi, Mr Ghedini gave reasons why his client should be acquitted. Regarding the charge of involvement in underage prostitution relative to Ms Mahroug, who was 17 at the time she attended so-called “bunga bunga” parties at Mr Berlusconi’s Arcore villa in 2010, Mr Ghedini said some prosecution witnesses were not even at Arcore on the nights in question.

Furthermore, more than 50 witnesses had stated in court that the evenings at Arcore had been “elegant dinner parties”. During her summing up two weeks ago, Ms Boccassini said many of the witnesses called by the Berlusconi team were unreliable since they were in his pay. Mr Ghedini argued they had been “helped economically” by Mr Berlusconi long before the Rubygate trial began.

As for the abuse of office claim, Mr Ghedini said his client had been convinced Ms Mahroug was the granddaughter of former Egyptian president Hosni Mubarak.

The court is expected to issue judgment at its next sitting on June 24th.