Death of a dictator: Franco’s demise recalled 40 years on

Tyranny in Spain was replaced by democracy, but its supporters continued to prosper 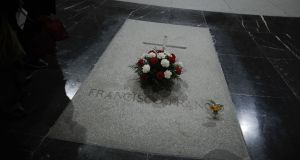 The tomb of Spanish dictator Francisco Franco in the Valle de los Caidos (The Valley of the Fallen) near Madrid. Photogrph: Pedro Armestre/AFP/Getty Images 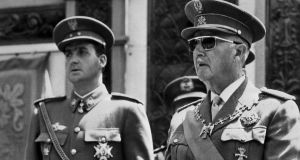 The then prince Juan Carlos of Spain and General Francisco Franco pictured in Madrid in the final days of the Franco dictatorship. Photograph: AFP/Getty Images

There was only one headline story on the front page of Spanish newspapers, day after day, in the late autumn of 1975.

Every Monday morning, walking down the long corridors where I taught English to electricity company employees in the Basque city of Bilbao, I remember seeing the word “GRAVE” in huge block capitals on every paper, in every office. It was always the same paper, because in those days Gen Francisco Franco’s dictatorship still rigidly controlled daily journalism.

“Grave”, I soon learned, meant “serious”, and referred to the state of the aged dictator’s health. Everyone knew he was dying except, apparently, Franco himself. A current joke, shared only in the strictest privacy, recounted that when thousands of distressed regime loyalists gathered outside his hospital, chanting “Adiós, Franco,” he had turned to his doctors and asked: “But where are they all going?”

Tuesday’s headline was “Más Grave”, “more serious”, and Wednesday’s reached a premature climax with “Gravísimo”. On Thursday, the headline could only go back to “Grave”, and the absurd cycle recommenced, or at least that’s how I remember it. It was a good enough way of learning the comparatives and superlatives of Spanish adjectives.

Franco’s miserably prolonged death agony obsessed both his supporters and his opponents. Some of us wondered unkindly why such a devout Catholic as the dictator should cling to his mortal existence with such tenacity.

This was, after all, a man who had summarily dispatched uncounted others to early graves throughout his long career. Notoriously, he used to sign sheaves of death warrants nightly over dinner, while leading the 1936-39 insurrection against Spanish democracy that led to his 40-year dictatorship. And only weeks before he died he had ignored clemency pleas from the pope and the EEC, and insisted on executing five members of armed opposition groups, including two from the Eta.

What was the headline on November 20th, 1975, the day he finally departed this life? Oddly, I can’t remember. But I recall being surprised that my two early-morning pupils, 30-something engineers and usually very punctual, were 20 minutes late.

Immediately they arrived, they went into a huddle. It was hardly necessary to say what had happened, but they could not tell me what they felt about it. Political discussions between strangers were still unthinkable, and would remain so for many months during the painful transition to democracy that followed.

Perhaps a certain instinctive trust had developed between us, or perhaps they just guessed, quite correctly, that my execrable Spanish made it safe to speak in front of me. Through sign language, we agreed to adjourn the class while they shared an intense conversation, and I kept an eye out for eavesdroppers.

Bilbao was like a ghost town that morning, and remained so for several days. It is said that shops across the country had sold out of cava and champagne weeks earlier, in anticipation of celebrations behind closed doors. But such faces as one did see on the street were utterly impassive. A smile would betray too much to the ubiquitous “forces of public order”; few in the student quarter where I lived were in mourning.

As all classes were cancelled, an Irish friend and I decided to visit the city of Vitoria, today the administrative capital of the Basque autonomous region. Our bed and breakfast there felt like a morgue. The black-and-white TV constantly re-ran footage of Franco’s funeral. Everyone tip-toed around it, avoiding speaking, avoiding each others’ eyes. The dictator might be dead, even buried, but the dictatorship wasn’t.

A walk in the nearby countryside reminded us again of that. The route we took came to a junction; there was a Guardia Civil checkpoint 50 metres down the other road. We suddenly felt hugely conspicuous, alone in Álava’s open landscape, with no other figures in sight for miles.

Were we paranoid? Probably, but then we had hardly taken five paces past the junction when the guardias summoned us to their position. Did we not know, their officer demanded, that one did not pass the Benemérita without a salutation? Buenas tardes, we stuttered, and walked on with as much dignity as our fear would permit. It was a long walk back to the city by the wrong road.

Slowly, but with increasing confidence and great courage, Spanish democracy got off its knees in the weeks and months the followed. The price was often very high.

In March 1976, police shot dead five striking workers and wounded 100 others as they exited peacefully from a church in Vitoria where they had been granted refuge. The interior minister, Manuel Fraga, who had served in Franco’s cabinets, defended their action. He went on to found the Partido Popular, the party in government in Madrid today.

The dictatorship was indeed replaced by democracy, but its supporters continued to prosper.