Moscow vows to seek Azeri-Armenian peace, and to keep selling arms to both sides 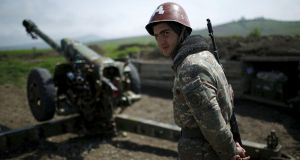 Deadly skirmishes have continued around the disputed Caucasus region of Nagorno-Karabakh, despite a ceasefire between Azeri and Armenian forces and Russian-led diplomacy to avert full-scale war.

Separatist officials in ethnic-Armenian Nagorno-Karabakh – which is backed diplomatically, financially and militarily by Armenia itself – said on Friday that two of its soldiers had been killed by Azeri mortar fire.

Azerbaijan claimed its troops had been shelled from Nagorno-Karabakh, a remote, mountainous area that is internationally recognised as Azeri territory but has run its own affairs since a 1988-94 war, which killed about 30,000 people and displaced more than one million, the vast majority of them Azeri.

A ceasefire was agreed with Russian mediation on Tuesday, but sporadic fire has continued, preventing each side from collecting all of their dead.

Azeri and Nagorno-Karabakh officials agreed to a full five-hour cessation of hostilities on Friday to allow each side to retrieve those who fell in battle.

Russian prime minister Dmitry Medvedev was in Baku on Friday for talks with Azeri president Ilham Aliyev, having visited Armenia on Thursday as part of a major diplomatic push in the region with Moscow’s foreign minister, Sergei Lavrov.

Mr Lavrov said in Baku on Thursday that “almost all the components of agreements are already on the table”, without revealing details.

Armenian president Serzh Sargsyan said he is willing to consider the deployment of peacekeepers to Nagorno-Karabakh, but Azeris fear that would only strengthen the status quo and entrench ethnic-Armenian control of the region.

“There are mechanisms for the resolution of the conflict, there are four resolutions of the United Nations security council demanding the withdrawal of Armenian occupying forces from Azerbaijan, which, unfortunately, are not implemented,” Mr Aliyev said on Friday.

Mr Medvedev told his host that Russia “would do everything in its power” to prevent further bloodshed and help find a lasting resolution to the conflict.

“I won’t hide the fact that this situation is of deep concern to us. Relations with both states [Azerbaijan and Armenia] are extremely important to us,” Mr Medvedev said.

“Russia is just as interested as Armenia and Azerbaijan in there being peace in this region,” he added.

Moscow sells weapons to Muslim Azerbaijan and Christian Armenia but has much closer ties with the latter, and has army and air bases on its territory close to the border with Turkey – which is Azerbaijan’s main ally.

Russia’s deputy premier, Dmitry Rogozin, said on Friday that Armenia and Azerbaijan were “strategic partners” for Moscow, and arms supplies to both would continue.