Legislation includes measure to confiscate valuables to pay for accommodation 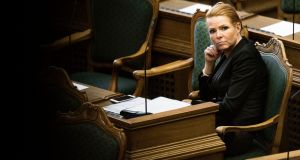 Denmark’s minister of immigration and integration Inger Stojberg at the asylum seekers debate in the Danish Parliament. Photograph: Mathias Loevgreen/Reuters

Denmark has become the latest European state to force refugees to hand over their valuables, with the continent increasingly using scare tactics and physical deterrents to deal with its biggest migration crisis since the second World War.

Following similar moves in Switzerland and southern Germany, Denmark’s parliament voted on Tuesday to allow police to search asylum-seekers on arrival in the country and confiscate any non-essential items worth more than 10,000 Danish kroner (about €1,300) that have no sentimental value to their owner.

The centre-right Danish government says the procedure is to cover the cost of each asylum-seeker’s treatment by the state, and mimics treatment of Danish citizens on welfare benefits.

The UN has nevertheless called the move concerning and regrettable, while an opposition party termed it “morally horrible”.

An academic specialist confirmed that Danes are expected to use their own income before claiming benefits, but pointed out that except in rare occasions police do not have the right to search Danish welfare claimants.

Rights campaigners have also criticised the new laws, which will also prevent refugees from applying to be reunited with their children for three years, and will only give war refugees from Syria a single year of protection.

Earlier this month, government spokesman Marcus Knuth said it was “ludicrous” to compare the new law to the treatment of Jews during the Holocaust, since similar laws apply to Danish citizens on welfare benefits.

“We’re simply applying the same rules we apply to Danish citizens who wish to take money from the Danish government,” Mr Knuth said.

But opponents to the law argue that while refugees can in general still expect to be treated humanely in Denmark, the new legislation is ethically unsound. Pernille Skipper, an MP and legal affairs spokeswoman for Enhedslisten, a left-wing Danish party, said: “Morally it is a horrible way to treat people fleeing mass crimes, war, rapes. They are fleeing from war and how do we treat them? We take their jewellery.”

Klaus Petersen, professor at the Centre for Welfare State Research, University of Southern Denmark, confirmed that Danish welfare claimants have to give up their savings before they receive benefits – but not their valuables, unlike refugees. They will also not be searched except in rare circumstances.

Mr Petersen said: “A Danish citizen could be searched in an extreme case if the municipality has a suspicion of fraud – but you need court permission to do so. For refugees, you would not need a court permission.”

A regional spokesman for the UN refugee agency, Zoran Stevanovic, said: “Denmark has traditionally been an inspiration to others for setting human rights standards, however, rather than showing and providing solidarity and sanctuary, Denmark is focusing on developing and implementing individual and restrictive responses.

“ UNHCR regrets that Denmark is introducing restrictions to its asylum policy rather than focusing on building and promoting a fair distribution of asylum seekers within all countries in the EU.

1 Coronavirus: More ‘striking’ evidence BCG vaccine might protect against Covid-19
2 Boris Johnson in intensive care after coronavirus symptoms worsen
3 Genetics shed light on origins of Irish strains of Covid-19
4 Coronavirus: 16 more people have died in Republic as public urged to ‘have patience’
5 Irish doctors on getting Covid-19: ‘In 90 minutes, I deteriorated quite rapidly’
Real news has value SUBSCRIBE