Curtain finally raised on Hamburg concert hall at 925% over budget 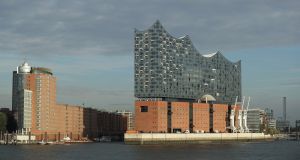 The new Elbphilharmonie concert hall in Hamburg in Germany, which will open early in the new year. Photograph: Sean Gallup/Getty Images

Six years late and an eye-watering 925 per cent over budget, the handover of Hamburg’s new philharmonic concert hall has proved that Germany can still do stunning architecture – just not efficient project management.

With its swooping roof and silvery facade, perched atop a former warehouse, the Elbphilharmonie rises from the choppy waters of Hamburg harbour like an enchanted circus tent. Its centrepiece is an airy 2,100-seat concert hall that places the orchestra at the centre of the action.

A hotel, restaurants, shops and luxury flats complete the complex in Hamburg’s Hafen City district, an urban regeneration project that, when completed, will almost double the city centre’s size.

The gala opening scheduled for January 11th, featuring the city-state’s NDR concert orchestra and star tenor Jonas Kaufmann, will be the first proper test for the acoustics in the concert hall, designed by Japanese acoustician Yasuhisa Toyota. The opening, part concert and part exorcism, ends a long, cursed road of delays and court cases, combined with the general plague of incompetence that hangs over all major public building projects in Germany.

Budgeted at €77 million, the hall’s final cost eventually ballooned to €789 million – all but 10 per cent footed by the taxpayer. Building work ceased for a year amid a legal battle between the city, the Swiss architects Herzog & de Meuron and the builders Hochtief.

For a time, Hamburg residents feared they would be left with a half-finished, extravagant folly. On Friday, though, the dramas and cost overruns were forgotten as locals strolled through the plaza, opened for the first time around the complex. More than a few were delighted that the complex was finished before Berlin’s cursed international airport – €3 billion over budget, six years late and counting.

Hamburg city fathers are optimistic that their investment will pay off – eventually – and give Germany’s second-largest city a bounce similar to the one the Guggenheim gave Bilbao, now a magnet for 300,000 extra visitors annually.

Hamburg tourism chief Michael Otremba already believes the new complex can become an iconic landmark, like the Eiffel Tower or Brandenburg Gate. “It represents a Hamburg that is turning back again to the water,” he says, “and the resistance you sometimes have to overcome to look to the future.”