Croatia and Serbia in grip of new Balkan struggle 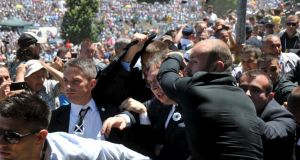 This has been a long, hot summer of powerful and painful memories in the Balkans, and it has made some people fear for the region’s future.

On a sweltering Saturday in July, thousands of people thronged the Srebrenica valley in Bosnia to remember 8,000 Muslim men and boys slaughtered there 20 years ago by ethnic Serb troops, and to bury 136 victims only recently identified from remains found in mass graves.

Addressing the commemoration, former US president Bill Clinton called for reconciliation between old Balkan enemies, and urged those present to shake the hand of the visiting Serbian prime minister, Aleksandar Vucic.

Earlier that week, however, Vucic and his government had enraged many Bosnian Muslims by urging Russia to block a United Nations resolution that would have condemned the massacre as genocide, as it has been deemed by a UN court.

When Vucic laid flowers in the cemetery, the crowd’s anger erupted. Many booed and whistled, some hurled stones and a banner was unfurled quoting one of his wartime speeches to the Serbian parliament: “For every Serb killed, we will kill 100 Muslims.”

Last week, some 80,000 Croats gathered in the town of Knin to celebrate two decades since the defeat of Serb separatist rebels in Operation Storm, which reunited Croatia but prompted about 200,000 Serb civilians to flee the country.

At a concert in Knin by nationalist singer Marko Perkovic Thompson, some people chanted “Kill a Serb” and slogans associated with the Ustase, a fascist movement that ran Croatia as a Nazi puppet state during the second World War.

At the same time in Serbia, Vucic and other officials attended events to mourn the “ethnic cleansing” of Operation Storm, and Serb nationalist and alleged war criminal Vojislav Seselj burned Croatia’s flag outside its embassy in Belgrade.

Vucic and current Serb president Tomislav Nikolic were close allies of Seselj before softening their antipathy towards the West and pledging to take Serbia into the EU, but they are still apt to use sharp nationalist rhetoric when expedient.

In Croatia too, right-wing forces are on the rise. President Kolinda Grabar-Kitarovic hails from the Croatian Democratic Union (HDZ) founded by 1990-1999 president Franjo Tudjman, and the party is confident of ousting the Social Democrats in a general election due within six months.

For some Croats, HDZ will always be associated with the lurid corruption scandals that saw party leader and former premier Ivo Sanader jailed for 8½ years, and with the virulent nationalism associated with Tudjman.

Sanader will now be retried, however, after Croatia’s constitutional court ruled last month that his 2010 trial had not been fair and, along with the HDZ’s upturn in fortunes, many of his compatriots feel nationalism is also resurgent.

In May, Grabar-Kitarovic visited Bleiburg in Austria to pay respects to Ustase members, Serb and Slovene Nazi collaborators, and thousands of civilian communist guerrillas massacred there at the end of the second World War.

The memorial attracts ultra-nationalists who proudly brandish the symbols and use the slogans of the Ustase, who killed hundreds of thousands of Serbs, Jews, Roma and Croat opponents, and ran concentration camps like the one at Jasenovac.

The more than 80,000 victims of that camp, 110km south of the Croatian capital, Zagreb, were remembered in April at a ceremony attended by Social Democrat prime minister Zoran Milanovic but not Grabar-Kitarovic.

Critics say the HDZ has an ambiguous attitude towards the Ustase that encourages the far right in Croatia, whose national football team will play its next two home games in an empty stadium after a swastika was painted on the pitch at a match in June.

Milorad Pupovac, an academic, veteran liberal politician and head of Croatia’s Serb National Council, says the country’s slide to the right is also apparent in everything from a campaign to have Serbian-Cyrillic writing removed from signposts in eastern Croatia to rising Catholic Church influence on social issues.

“At Srebrenica this year I learned a lot. I learned that we [in former Yugoslavia] are still at war, and still led by warlords. Now they are not necessarily fighting for territory, but for values and for minds.”