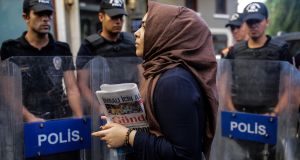 A woman holding the Ozgur Gundem newspaper, one of the outlets ordered to close by a Turkish court. Photograph: Yasin Akgul/AFP/Getty Images

Two months since a failed military coup sent shockwaves through Turkey, independent investigations into who was responsible, and why, have failed to emerge.

That is down in large part to the gutting of Turkey’s independent press. More than 115 journalists have been imprisoned and hundreds more fired since the July 15th coup attempt, while 130 media outlets have been shuttered. That, in addition to the sacking of more than 1,000 media workers in the previous 12 months, has left crucial questions unanswered. Put simply, there is no one left – or willing – to overturn the stones on which the failed military takeover was built.

Despite the absence of any real evidence against US-based Fethullah Gulen, a point cited by Washington for its sluggishness to open extradition proceedings against the cleric, the Turkish government and president Recep Tayyip Erdogan have gone to great lengths to cast responsibility for the coup on him and his followers.

Dozens more reporters have had passports revoked and more than 330 have had press credentials cancelled. For independent Turkish journalists either with links to Gulenist media or endeavouring to do their job of investigating the events of July 15th – one of the most significant events in modern Turkish history – life has become a living nightmare.

“They just showed me a couple of stories that I’ve published, some tweets. Actually the things that they asked me were nothing. They just printed out what they found about me by Googling my name,” he said.

A lucky few have fled. In May former editor of the centrist Cumuhuriyet newspaper, Can Dundar, was sentenced to five years and 10 months for a story suggesting Turkish forces shipped weapons to Syrian rebels in 2014. A recipient of this year’s International Press Freedom prize, he is thought to have escaped to Germany since his release pending an appeal. Mr Dundar was shot at outside the courthouse on the day of his sentencing in May, and following the failed coup resigned. Last weekend his wife had her passport seized at Ataturk airport.

Though unaffiliated with Gulen’s network, Kurdish outlets and journalists have been affected by the 90-day state of emergency and post-coup purge that led to the detention of 12 Kurdish journalists. Turkish authorities repeatedly conflate Kurdish separatists, Isis and Gulen supporters as a united threat.

Mr Gulen, in May charged with heading up a terrorist organisation, has millions of supporters in Turkey who adhere to his brand of social democratic Islam. Over decades Gulenists opened schools, media outlets and held prominent jobs in the judiciary and police forces.

President Erdogan turned on his ally in late 2013 when police acting on court orders attempted to seize documents and detain individuals close to the president and his family. Since then, their influence has been greatly reduced and the group thoroughly persecuted.

More worrisome for the country, however, is the absence of independent reporting to figure who exactly was responsible for the failed coup.

Mr Mumay, who could face a seven-year sentence, says there are specific reasons for that. “If you publish anything which has different details than the government’s story, you may be in trouble. So no one would dare to publish a story about what really happened at that night . . . If the public cannot learn what really did happen, how can they decide for their future?”

“If you step outside of the general rhetoric as a politician, a journalist or even an individual citizen you face certain risks,” says Ozgur Ogret, the Turkey representative for the Committee to Protect Journalists. “These risks range from being labelled as a pro-coup traitor to being imprisoned as a terrorist . . . Journalists who dare to criticise the ongoing crackdown against all dissident voices in Turkey are gambling with their freedom.”