Pope Francis returned from a visit to the Greek island of Lesbos on April 16th, taking 12 Syrian refugees with him as a 'gesture of welcome' amidst what he called 'the greatest humanitarian catastrophe since World War Two' Video: Reuters 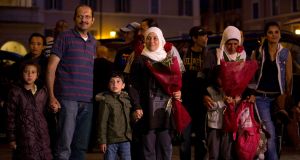 Syrian refugees Wafa, in the centre with white scarf holding her son Omar’s hand, husband Osama, second from left as they arrive with another Syrian family at the St Egidio Community in Rome on Saturday. Photograph: Alessandra Tarantino/AP 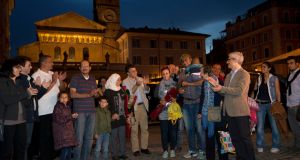 Syrian refugees are welcomed as they arrive at the St. Egidio Community in Rome on Saturday. Photograph: Alessandra Tarantino/AP 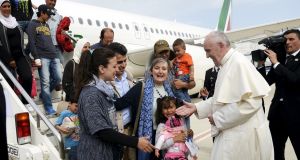 Pope Francis welcomes a group of Syrian refugees after landing at Ciampino airport in Rome following a visit at the Moria refugee camp in the Greek island of Lesbos on Saturday. Photograph: Filippo Monteforte/Pool/Reuters

When six-year-old Syrian refugee, Omar, sat down to his first meal in Italy in the Comunità di Sant’Egidio in Rome on Saturday night, he was greeted with a plate of familiar cous cous.

That was probably just about the first familiar thing that Omar came across yesterday ever since his parents told him that they were about to leave Lesbos, the Greek island that has become the front line of Europe’s migration crisis.

Omar was one of the six children and six adults who travelled back to Rome on Saturday with Pope Francis, following the pontiff’s five hour visit to Lesbos.

When the Pope accepted the suggestion of one of his close collaborators last week, namely that he might bring back some migrants with him to Rome, it was only logical that the Holy See would look to the Comunità di Sant’Egidio to provide the nuts and bolts, not to mention roofs and beds.

Based in the Church of St. Egidio in Trastevere, Rome, this lay community grew out of Catholic student, charitable activism in the heady days of student riots in the ’60s.

Now based in more than 70 countries, Sant’Egidio activists run soup-kitchens and language schools for immigrants, as well as centres for migrants, the elderly, the handicapped, the homeless and the dying and much else besides.

Thus it was that other refugees in the community prepared a meal of cous-cous and falafel for their unexpected guests last night.

Mario Marazziti of Sant’Egidio told The Irish Times that the new arrivals are “in a state of incredulity as well as happiness”.

For Omar, the first big shock on the day came on the papal plane to Rome. After months in the refugee camp in Lesbos, he was amazed to findthat he did not have to queue to use the toilet. Omar’s parents, Osama and Wafa, took to the migrant road after their house in Zamalka, on the outskirts of Damascus, was destroyed in a bombing raid.

Sant’Egidio puts much emphasis on trying to help migrants along a path of integration. Thus it was that the three Syrian families started off their new life in Italy on Sunday by attending an Italian language class. Two of the migrant fathers are qualified engineers so Mario Marazziti hopes that eventually, having learned Italian, they will be able to find work.

Marazitti says that the Community was only informed three days ago about the Pope’s initiative. As for why these particular three families were chosen from the approximately 4,000 migrants on Lesbos, Mr. Marazziti repeated what Pope Francis said on the papal plane home.

Asked if it might not have been more “useful” to pick non-Muslim migrants, given the difficulties of Muslims to integrate themselves into Western society, Francis said: “I didn’t choose between Christians and Muslims. These three families had all their documents ready and in hand and we could do it. For example, there were two Christian families on our first list but their papers weren’t ready. This is not a privilege. All 12 people are sons of God...”

During his Angelus homily in St. Peter’s Square on Sunday morning, the Pope said that he had seen “much pain” in Lesbos, pointing out that many of the children had witnessed the death by drowning of “parents and friends”.

Little Omar is lucky. He is now far from the bombs and he still has both his parents. Despite that, though, the trauma of living through daily bombardments meant that, for a while, he stopped talking. Safe in Rome, over a plate of cous cous, maybe he will find his voice again.