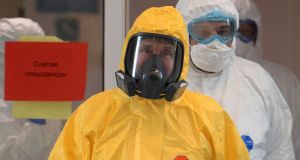 Russian president Vladimir Putin wearing protective gear visits a hospital where patients infected with the Covid-19 novel coronavirus are being treated in the settlement of Kommunarka in Moscow. Photograph: Alexey Druzhinin/Sputnik/AFP

Russia’s official data showing a low rate of infections caused by the novel coronavirus underestimate the real scale of the disease outbreak in the country, a senior Russian official has warned Vladimir Putin.

Addressing the Russian president on Tuesday during a televised meeting with senior officials about the pandemic, Sergei Sobyanin, a former presidential chief of staff and Moscow’s mayor since 2010, said that many coronavirus patients were simply not tested. He urged the Russian president to take more steps to slow down the spreading of Covid-19, the illness caused by the coronavirus.

The warning from one of the country’s most prominent officials clashes with the Kremlin’s official stance that the outbreak is under control and that drastic measures deployed in other countries are unnecessary. The rare dissenting voice has raised fears that large numbers of infected people could soon swamp the country’s hospitals.

“The dynamics are high, a serious story is unfolding,” Mr Sobyanin told Mr Putin. “Furthermore, we see that quite a lot of people are at home, they are simply not tested.

“Those who came from abroad, who can afford it, they sit in their dachas, in apartments, in self-isolation, they feel good, and thank God let them be,” he added. “But really those who are sick: there are far more.”

Russia’s government said on Tuesday it had registered 57 new confirmed cases, taking the official total to 495 in a country of 146m people. France, with roughly half the population, has about 40 times that number, and neighbouring Belarus has three times as many per capita.

“The fact is that the testing volume is very low, and the real picture, no one in the world knows,” Mr Sobyanin said. Russia’s deputy prime minister interjected that 163,000 tests had been administered.

“Sooner or later this problem will emerge,” Mr Sobyanin said. He added that if measures such as enforced quarantine for elderly people were not rolled out nationally “the system simply will not cope”.

Coronavirus has presented a challenge to Mr Putin, who this spring has sought to push through dramatic changes to Russia’s constitution that would allow him to rule for 12 more years beyond 2024, when his current term limit as president is enforced.

He has continued to push for a public vote to endorse the changes on April 22nd, but the Kremlin has admitted that if the public health situation becomes critical, a postponement would be necessary.

Mr Putin, who in recent days has continued to hold public and private meetings without wearing a face mask or requiring attendees to maintain a safe distance between each other, responded to Mr Sobyanin by saying he would meet government officials later on Tuesday to discuss his suggestions.

“It should be understood that if 6,000 people arrived in the [Russian Far East region] who visited infection zones abroad in the infection zone, then this is a problem,” Mr Sobyanin said. “Therefore, for all regions without exception - regardless of whether they have patients or no patients – everyone needs to prepare.” – Copyright The Financial Times Limited 2020

1 Tuberculosis vaccine ‘potential game-changer’ in Covid-19 fight
2 Coronavirus: Situation in Ireland ‘misrepresented’ because of limited testing
3 Coronavirus Q&A: How to shop safely during Covid-19
4 Coronavirus: Efforts to tackle nursing home outbreaks to be ramped up
5 We need to cancel the Leaving Cert and give students predicted grades
Real news has value SUBSCRIBE