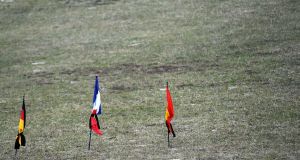 German, French and Spanish flags in a field in the southeastern French village of Le Vernet, the closest to the site where the German Airbus A320 went down. Photograph: Anne-Christine Poujoulat/AFP/Getty Images

Spanish police will pursue the writers of online comments that mocked the death of Catalan passengers on the downed Germanwings flight from Barcelona and highlighted the country’s regional tensions.

“It’s not the first time, unfortunately, that we’ve seen that the social networks are carriers of hatred,” said Francisco Martinez, Spain’s secretary of state for security, at a news conference in Madrid.

He said the messages posted on sites such as Twitter showed “tremendous cruelty”.

At the moment, Catalan police are investigating 24 tweets and 17 Twitter user profiles to see if hate crimes or discriminatory offences have been committed, said a spokesman for the force, known as Mossos d’Esquadra, who asked not to be identified by name.

The government estimates that 51 Spanish people perished on Tuesday when the Airbus A320 flown by Deutsche Lufthansa AG’s low-cost unit crashed in the French Alps.

On Wednesday, Spain began three days of mourning for the victims of what may be the nation’s worst loss of life in a single incident since a train crash in July 2013 killed 79 people.

While understanding the antagonism is not the common feeling in Spain “we have to put all this information before the prosecutor,” said a spokesman for the Catalan regional government.

A push for independence from Spain led by Artur Mas, the head of Catalonia’s regional government, has stirred up grievances at centralist rule that go back to the War of the Spanish Succession at the start of the 18th century.

Mr Mas’s campaign to secede from Spain means Catalan independence will be the key question facing voters in the region’s elections to be held in September.