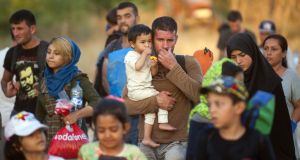 Migrants and refugees cross the border between Greece and Macedonia near the town of Gevgelija on Friday. More than 230,000 refugees and migrants have arrived in Greece by sea this year. Photograph: AFP/Getty Images

Taoiseach Enda Kenny and Tánaiste Joan Burton have both said that Ireland may take thousands more refugees in the coming years in response to the European migrant crisis.

Mr Kenny and Ms Burton both suggested on Friday that the final total could surpass the figure of 1,800 suggested by Minister for Justice Frances Fitzgerald. But Coalition figures could not say whether people will be accommodated within the direct provision system, or where accommodation will be found.

Details are still being worked out between officials in the Department of Justice and the European Union.

The European Commission is expected to unveil a proposal next week to relocate an extra 120,000 refugees across the EU, amid calls for a united EU response to the crisis unfolding across Europe.

“As part of such a response, I firmly expect that Ireland will take several thousand refugees over a multi-year period.

“However, while this will be a significant extension of Ireland’s responsibility in this area, it is clear that simply taking a quota of refugees is not enough. A long-term global solution has to be put in place to bring peace to their homelands.”

Asked whether 1,800 was a baseline for the reception of migrants, Mr Kenny said: “If you multiply from the 40,000 originally determined to now over 100,000, the figure may be more. We may well run into very substantial numbers, not just to Europe but to other locations.”

Mr Kenny said he disagreed with Hungarian prime minister Viktor Orban, who has suggested his country’s “Christian roots” were threatened by Muslim refugees.

“One of the founding principles of the European Union is the freedom of movement of people, and obviously we respect that completely,” Mr Kenny said. “That movement has to be irrespective of colour or creed . . . I disagree with the emphasis that Viktor Orban has put on that.”

President Michael D Higgins said EU member states may have to take two or three times as many migrants as initially expected.

“We have to decide at certain times in our life to do what is right, and what is right is to come to the assistance of those who, like our own ancestors, were being lost in the sea of the Atlantic three generations ago,” he told RTÉ.

Meanwhile, Minister for Foreign Affairs Charlie Flanagan has said it is too early to put numbers on how many migrants Ireland will accept as part of an EU relocation plan, though it will definitely increase its intake of people fleeing countries such as Syria.

“I don’t think it’s possible at this stage to put actual numbers on an intake of people,” he said, on his way into a meeting of EU foreign ministers in Luxembourg. “One thing for sure is that Ireland will be increasing its commitment in terms of numbers.”