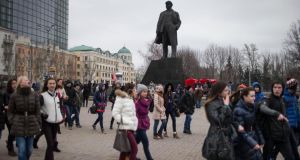 Across Ukraine, statues of Vladimir Lenin have come tumbling down this week as revolutionaries, fresh from victory in Kiev’s Maidan, set out to destroy symbols that smack of Moscow’s domination.

However, in the pro-Russian regions of eastern Ukraine, many people distrust the Maidan’s pro-western stance and have risen up to protect monuments to the founder of the Soviet state.

In Kharkiv, Ukraine’s second-biggest city, local residents have installed barricades around a statue of Lenin after fending off an attack by revolutionaries late last Saturday.

“This is an architectural monument. It cannot be removed without a public referendum,” said Sergei Argarkov, an Ukrainian television employee, and one of several hundred Kharkiv residents camping at the Lenin monument in the city’s Freedom Square.

Three months of political upheaval that culminated in the overthrow of Viktor Yanukovich, Ukraine’s president, last weekend, have accentuated the deep cultural rift between the two sides of the country.

Western Ukraine bordering the European Union looks to the democratic west for inspiration, while the industrialised, coal-mining eastern regions of Kharkiv, Donetsk and Lugansk see in Russia their best hope of economic salvation.

What most alarms Kharkiv residents is that so many of the revolutionaries appear to be members of the Pravy Sektor movement, the militant, ultra-nationalist group that defended the barricades at Kiev’s Maidan.

A newcomer to the political scene, Pravy Sektor flies the red-and-black flag of the Ukrainian Insurgent Army that collaborated with Nazis in western Ukraine during the second World War and saw Germany as a potential liberator from Soviet occupation. Fiercely patriotic, Kharkiv fought for the Soviet army and was captured twice by German forces.

Angry crowds have gathered around the government building in Kharkiv, chanting “Fascists Get Out” at the masked men behind the barricades.


Blurred lines
As often happens after revolutions, lines of authority have become blurred. Mikhail Dobkin, the governor of Kharkiv region and a supporter of Yanukovich, has not been seen since announcing plans to run in the May presidential election.

Gennady Kernes, Kharkiv’s mayor, and another Yanukovich ally, has also kept a low profile. Most voters in Kharkiv voted for Yanukovich in the 2010 presidential election, but it’s now difficult to find anyone with a good word to say for him.

However, the city remains wary about the goal of the Maidan to integrated Ukraine with the EU. “If we go into the EU, we must be equal partners,” said Argarkov. “We don’t want to end up like Bulgaria, Serbia or Estonia.”

“The revolution was a power grab by one clan from another,” said Alexander Serdyuk, a law student. “There’s no real difference between Yulia Tymoshenko [a former president], Yanukovich and these new leaders. They are all part of the same ineffective system.”