Child migrants of the Mediterranean pay a high price

Every week thousands of children travel in unseaworthy boats from Africa to Europe. Some of those who made it to Sicily share their stories 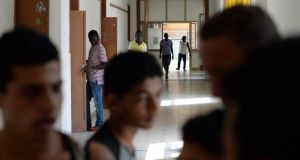 ‘I am 15,” says Taha, a migrant Egyptian and one of the 130 unaccompanied minors who are resident at the l’École Verte centre in Augusta, a city in the southwest of Sicily. Taha does not look 15. He has the face and build of a child barely 11.

Taha says his parents paid a trafficker in Alexandria 30,000 Egyptian pounds (€3,350) for his passage on a boat to Italy. He and more than 250 others were forced to switch boats twice, before being rescued by the Italian navy after 10 days at sea.

Taha is an economic migrant. Whatever circumstances faced his family at home in Egypt, they were dire enough to prompt them to send their child away alone to seek work. They would have known the risks involved in the journey: more than 3,000 migrants have died so far in 2014 on boat journeys to Europe.

Taha’s family also made sure their son knew exactly how much the monetary cost of his journey was.

If a boy says he is 15, he will age out of the system faster, and start earning money faster. If he is granted the asylum he seeks, he need only be under the care of the Italian state until he is 18.

Mohammad, who also gives his age as 15, was on the same boat from Egypt as Taha. Was he scared during those 10 days at sea? He laughs before he answers. The translator says: “He says that is a very strange question. Everyone should be scared on that journey. He was between life and death the whole time.”

The 130 boys at this centre in Augusta, a former school, are among the 10,900 unaccompanied minors that have arrived in Italy this year, virtually all of them male. The boys here are mostly from Egypt, The Gambia, Eritrea, Ghana and Bangladesh. What were once classrooms are now filled with camp beds. On the walls, dog-eared posters of the alphabet still remain.

They all want to stay in Italy, and are in the process of applying for asylum. Nobody I meet has any papers, yet they managed to cross multiple borders without identification, which shows how porous some international borders are.

For instance, one Bangladeshi boy at the former school spoke of paying “a contractor in Dhaka $4,000 (€3,200) to get to Italy”. He said he and others changed buses frequently, always at night. The countries they crossed illicitly included India, Pakistan, Afghanistan, Iran, Iraq, Jordan and Egypt.

The boys are meant to stay here only a few days, but such is the limited space in existing residential centres that some of them, like Sharif, have been here for months. Sharif, from Ghana, says he is 17. He is a classic example of how complex the current layers of migration to Italy are. He’s been here since May, when he arrived on a boat from Libya.

His father died when he was seven, and his mother went to Libya to work. Sharif was raised by a grandmother until he was nine. An uncle took him in when she died but they didn’t get on. He ran away to Togo and started working in construction. Three years ago, he went to Libya to join his mother, where he worked until it became “too dangerous”, as he puts it.

“I was told to leave Libya by the rebels.” He was told by his Libyan employer it wasn’t safe to employ him anymore. Soon after, he was arbitrarily thrown in prison, and not released until he paid a fine of 400 dinars (€260). He decided to risk the boat to Italy. Having gone to Libya as an economic migrant, and worked there for three years, he found himself forced out of that country by the ongoing civil war.

“When I got here, I phoned my mummy to say I was safe, and she said she wanted to come here too. But ever since, when I phoned her, there is no answer, and I don’t know if she is still in Libya, or somewhere in Sicily.”

Sharif looks distraught and close to tears. The unspoken alternative scenario is that Sharif’s mother was one of the hundreds of unidentified migrants who are known to have drowned this summer in the Mediterranean.

A boy is sitting on a camp bed in a corridor, intensely studying phone numbers written on a scrap of paper. He explains they are the numbers of family members at home in Mali. Lassana is 16 and a new arrival. He mimes shooting into the air with a gun. He left Mali for Libya because of ongoing unrest in his country.

“They put me in prison in Libya for four months, just because I was a foreigner,” he says. Unlike Sharif, he could not afford to pay a “fine” for his release. Six nights previously, Lassana was taken from prison by rebels, brought to the Libyan coast and dumped on a trafficker’s boat against his will. He did not pay for his passage: he was effectively being sentenced to the lottery of life and death every migrant plays on this journey. “If I refused, I would have been killed,” he says.