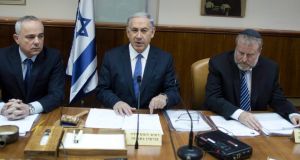 Denmark’s ambassador to Israel and the Danish chief rabbi have criticised the call by Israeli prime minister Binyamin Netanyahu for the country’s Jews to move to Israel following the fatal shooting at Copenhagen’s Krystalgade synagogue.

Mr Netanyahu warned that the incident, in which a Jewish security guard was killed, will not mark the end of terror attacks against European Jews.

“Once again Jews are murdered on the soil of Europe just for being Jews. This wave of terror attacks is expected to continue, including these murderous anti-Semitic attacks.”

He called on Danish Jews to move to Israel.

“Obviously Jews deserve protection in every country, but we say to the Jews, to our brothers and sisters: ‘Israel is your home,’” he told cabinet ministers.

However, Copenhagen’s ambassador to Israel, Jesper Vahr, insisted that Jewish citizens were an integral part of the country’s society and should remain in the country.

Jair Melchior, Denmark’s chief rabbi, said he was “disappointed” by Mr Netanyahu’s call for the Jewish community to immigrate to Israel.

“Terror is not a reason to move to Israel,” he said. “People from Denmark move to Israel because they love Israel, because of Zionism. But not because of terrorism. If the way we deal with terror is to run somewhere else, we should all run to a deserted island.”

Mr Netanyahu’s call for European Jews to move to Israel came as the government approved a €40 million package to encourage Jewish immigration from France, Belgium and Ukraine.