First 700,000 copies sell out within minutes 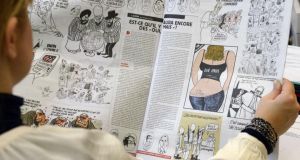 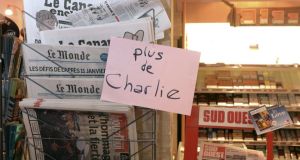 A sign which translates as “Charlie Hebdo - Sold Out” is displayed at a newsagents in Bordeaux. Photograph: AFP/Getty/Hean Pierre Muller. 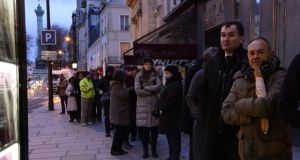 People wait outside a newsagents kiosk in Paris on Wednesday. Photograph: AFP/Getty/Bertrand Guaybertrand

Charlie Hebdo has increased the print run of its latest issue to five million in order to meet demand after the first 700,000 copies sold out in newsagents across France within minutes this morning.

A week to the day after 12 people were killed in an Islamist attack on the offices of the satirical newspaper, long queues formed at dawn outside shops and kiosks for the issue produced by its surviving journalists. It is set to become the best-selling issue of any French newspaper.

By 10am, Charlie Hebdo’s distributor announced that it had sold out at all 27,000 points of sale in France. Many kiosks were out of stock much earlier, however, prompting the newspaper to add an extra two million copies to its print-run. The issue will be distributed in 20 countries and translated into five languages.

As the remarkable scenes were reported by television and radio, Patrick Pelloux, one of the newspaper’s columnists, tweeted: “Shortages of Charlie Hebdo everywhere! Firstly, thank you, and rest assured we’re going to re-print and re-distribute.”

On the Boulevard Saint-Michel in Paris, 86 of one kiosk’s allocation of 100 copies had been reserved; most of the people who queued from before 8am left empty-handed.

At Saint-Lazare station, more than 60 people waited outside a newsagent before 6am. At he left the Élysée Palace after the weekly cabinet meeting, prime minister Manuel Valls - who is lampooned in the issue - carried a copy under his arm.

The latest cover features a cartoon of the Prophet Muhammad shedding a tear while holding a sign that reads “Je suis Charlie” with the words “All is forgiven” in French above it on a green background.

“I wrote ‘all is forgiven’ and I cried,” Renald “Luz” Luzier, who drew the image, told journalists at a press conference at the headquarters of Libération, where the survivors have been working under heavy police protection.

“This wasn’t the front page the world wanted us to do, but it’s the one we wanted. The Muhammad we painted is, above all, a figure that is crying,” said Luz. Gérard Biard, the editor-in-chief, added: ”Our Muhammad is a lot more likeable than the Muhammad that the terrorists brandish.”

With demand surging for the first issue since Islamist gunmen attacked the magazine, digital versions will be posted in English, Spanish and Arabic, while print editions in Italian and Turkish will also appear. The print run dwarfs the magazine’s normal weekly sale of 60,000 copies.

The clamour for copies has driven some to scour eBay within hours of the controversial title hitting shelves. The survivors’ edition of the French satirical magazine costs €3, but has already attracted three-figure bids on the UK version of the internet trading site.

The proceeds of the first million copies will go directly to Charlie Hebdo, as the distribution companies have agreed to do the work for free.

The issue will include other cartoons featuring the prophet and making fun of other religions, its lawyer Richard Malka said. “We will not back down, otherwise none of this has any meaning,” he said.

Charlie journalists said that when they sat down to plan the issue, joined by a number of the magazine’s former staff, who came to help out, Mr Pelloux began by saying: “So, what’s in the news this week?” The team laughed, and got to work. Eulogies were banned; the only instruction was to produce a “normal” issue of the magazine.

“A good issue of Charlie Hebdo is one that you open, one that frightens you when you see the cartoon, and then makes you laugh out loud,” Mr Malka said.