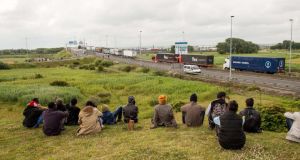 Migrants sit near the A16 highway as they try to access the Channel Tunnel on in Calais, northern France. Photograph: Philippe Huguen/AFP/Getty Images

Traffic was halted through the Channel Tunnel linking Britain and France on Tuesday after striking French ferry workers set fire to tyres, while Britain’s foreign office warned of migrants trying to get into vehicles queuing to enter the tunnel.

Television images showed large crowds of migrants trying to board waiting lorries. Others were held back by riot police.

Eurostar services are due to resume on Wednesday.

About 400 workers blockaded the port of Calais to protest restructuring at its MyFerryLink division, the Syndicat Maritime Nord trade union said. Shipping was halted early in the day and both Eurotunnel and Eurostar later suspended their services.

“Traffic in the tunnel is suspended because of burning tyres, which are the result of port workers,” a Eurotunnel spokeswoman said of an incident at the terminal entrance.

The union opposes plans by Eurotunnel to sell two of MyFerryLink’s three passenger vessels and convert the third to freight, cutting jobs.

Eurostar said it had been informed by Eurotunnel that the tunnel would remain closed all day. “We expect normal service to be resumed tomorrow,” it said in a statement.

Earlier, French strike police were deployed to remove protesters blocking motorway access to the tunnel, which had created a 10km tailback.

A spokeswoman for British prime minister David Cameron said Britain was in close contact with French authorities. Britain issued travel advice that said migrants were using the disruption to try to board queuing vehicles.

“There are large numbers of illegal migrants in and around Calais who may seek to enter the UK illegally,” the foreign office said. “Although local police patrols have been reinforced, you should keep vehicle doors locked in slow-moving traffic and secure your vehicle when it is left unattended.”

The incident is the latest flare-up involving migrants who have amassed around Calais, hoping to get into Britain.

That is part of a wider migration crisis facing Europe, the target of tens of thousands fleeing conflict in the Middle East and Africa or of others trying to escape poverty in their home countries.

The deputy mayor of Calais reiterated calls from French politicians for the border to be moved from northern France to Britain.

Philippe Mignonet told the BBC: “Calais is not the destination. As you’ve heard, [migrants] want to get into trucks, they want to get to England. England has got to realise that it is not our responsibility.

“The English border is in Calais and I’m requesting. . . for the border to be transferred back in Dover and in Folkestone.

“We can’t just accept any more, to be blamed for immigrancy. Again, they want to go to England. They are not coming to Calais; they go through Calais to get to England.” – (Reuters)