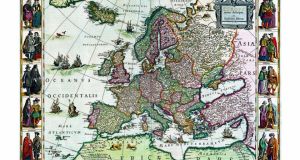 Europe at the centre: detail from a map by Willem Blaeu, a cartographer of the 16th and early 17th century.

Asked what he thought of Western civilisation, Mahatma Gandhi is said to have replied: “It would be a good idea.”

And James Joyce, in the Cyclops episode of Ulysses, has the Citizen reply to Bloom’s defence of English “moderation and botheration and their colonies and their civilisation”: “Their syphilisation, you mean . . . To hell with them! . . . Any civilisation they have they stole from us. Tonguetied sons of bastards’ ghosts.”

Civilisation normally comes with a hierarchy of excellence contrasted with the primitive or barbaric. In Europe that hierarchy was intimately tied up with its imperial conquest and appropriation of the rest of the world in the name of modernity, so that colonies and ex-colonies covered 84 per cent of the global land surface in 1930.

By 1970 that percentage had been dramatically reduced by colonial independence, and by 1990 further so with the end of the informal Soviet empire. A brief decade-plus of unipolar United States informal empire ensued, but that too is coming to an end. As the world now becomes more multipolar this heritage of Eurocentrism becomes deeply problematic, obviously in Europe but also in the transatlantic “West”.

Emerging powers in Asia, Latin America and Africa no longer accept the easy assumption that Europe’s pioneering role in enlightenment, science, industrialism and democracy confers privilege as before. Some of their thinkers dispute that history in the name of their own civilisational experience or, like the Citizen, assert victims’ rights to it. Some are determined to displace those previously on top of the pile.

Modernity
All must struggle with the intellectual problem that, along with Europe’s modernity came its claim to universalism, the assumption that its various truths are valid across all time, space and cultures. If this is not so, are there other sources of universality and what might they be? Or will Eurocentrism be succeeded by a competitive relativism reflecting a more divided world?

The Irish social theorist Gerard Delanty, based in the university of Sussex, addresses many of these problems in his recent book Formations of European Modernity. Delanty says previous analysis was introverted about the European heritage and paid little attention to how Europe interacted with, or was even created by, relations with the other civilisations it encountered. He brings a critical concern with cosmopolitan thinking to the task, along with a deep interest in multiple modernities – the idea that there is no one path to that state but many and that Europe’s journey is therefore not privileged (see www.drb.ie, July 1st edition, for a review).

Modernity as emancipation
Delanty says modernity can be defined as an emancipatory condition that proclaims human autonomy, both individual and collective, as an aspiration which must be realised in social institutions. His critical cosmopolitanism embraces openness to the world, transformation of self and society in encounters with others, explorations of otherness within the self, critical responses to globality and identification of transformative possibilities within the present.

This is an impressive toolkit with which to interrogate European history and explore its relations with other civilisations. A similar project is under way in the university of Oxford entitled “Rethinking Europe in a Non-European World” (RENEW). Its principal theorist, Kalypso Nicolaïdis, explores in a recent article with Nora Fisher Onar the subject of a “decentring agenda – Europe as a post-colonial power”. Decentring is needed and can be found in both the theory and practice of Europe’s international relations – accepting the EU has now hegemonised the European space – but it “requires a revolution of a Copernican order” compared to the past because of continuing legacies, resistances and neocolonial behaviour.

Three moves are required to achieve it, they argue: a provincialising one to question Eurocentric accounts of world history and politics; mutually engaging the perspectives of other world regions to learn from them; and reconstructing Europe’s external relations on the basis of mutuality and empowerment. They are especially critical of how the efforts to ground European integration on escaping from 20th century intra-European wars involved simultaneously forgetting its colonial role.

Ireland’s colonial past within Europe gives us the potential to make a fruitful contribution to these debates intellectually and in terms of policy. Another political theorist, Chantal Mouffe, makes the point in her recent book, Agonistics, that the world is a pluri-verse, not a universe, because it is not only multiple but different too – though not therefore necessarily antagonistic. Delanty’s critical cosmopolitanism can help retrieve and create universality from such a pluri-polarity.