Fear that turnout could be adversely affected if court, as expected, rules vote is illegal 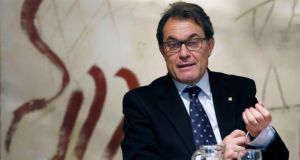 The Catalan government is considering suspending a referendum on independence from Spain, which it had been planning to hold this autumn, if authorities block the initiative, according to reports.

The regional administration of Artur Mas, backed by fellow nationalists, has set a date of November 9th for the non-binding referendum, which it envisages leading to the establishment of an independent Catalan state.

However, the central government opposes the vote on the grounds that it breaches the Constitution.

El País and El Mundo newspapers reported yesterday that Mr Mas and his Convergència i Unió (CiU) coalition could delay the referendum if the Spanish Constitutional Court rules it illegal, as is widely expected.

“Under those circumstances we wouldn’t take the ballot boxes out into the street, because that would make things too easy for our adversaries,” El País reported a senior CiU politician as saying.

The same source added that the Constitutional Court’s opposition would hurt the turnout of the referendum and therefore its credibility. “On the day that it is held we want an 80 per cent turnout, not 50 per cent,” the politician said.

The referendum plan has led to an increasingly tense stand-off between the northeastern region and Madrid, and one of the deepest political crises of Spain’s democratic era.

Pro-independence campaigners complain that Catalonia, an industrial hub, pays much more in tax than it receives in investment from the Spanish state. They also cite political meddling by Madrid and cultural differences.

An April poll by the Catalan government showed 47 per cent of Catalans would vote “yes” to both questions. Hundreds of thousands are expected to come out onto the streets of Barcelona on September 11th, Catalonia’s national day, to demand independence.

In July, Mr Rajoy and Mr Mas met to discuss the stalemate for the first time in nearly a year, although they appeared to find little common ground. On Monday, the prime minister reiterated his stance. “It’s crazy what is being planned right now and it is deeply negative for Catalan society and Spanish society,” he said.

A poll by Metroscopia in July showed the Socialists’ “third way” alternative to be marginally more popular among Catalans than independence, although neither the Spanish nor the Catalan government has embraced the idea.

But while Mr Mas is under pressure from Madrid not to stage the referendum, his partners in the project are adamant he should stay firm.

The Catalan Republican Left (ERC), which governs in partnership with CiU, has been particularly vocal, insisting the referendum should override institutional resistance.

In response to yesterday’s reports that Mr Mas is rethinking the referendum plan, ERC leader Oriol Junqueras hinted that his party would withdraw its support from the Catalan government if the vote is delayed, potentially leaving CiU politically exposed.