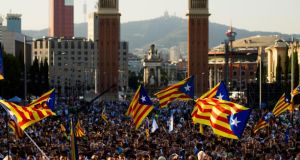 People gather for aJunts pel Sí (Together for the Yes) rally in Barcelona on September 25th, 2015. Photograph: Alex Caparros/Getty Images

It has been a tough couple of weeks for Catalonia’s independence movement. On February 10th, Jordi Pujol, the region’s former premier who is widely regarded as the godfather of modern-day Catalan nationalism, was questioned in the high court regarding a fortune he had kept hidden in tax havens.

Meanwhile, the constitutional court provisionally suspended the Catalan government’s creation of its own foreign ministry – a predictable move, but one that highlighted the legal mechanisms Madrid is willing to use to thwart the secessionist drive.

Away from the political arena there was a more human blow, with the death of Muriel Casals, a veteran pro-independence figure and deputy in the Catalan parliament.

Those events have coincided with the opening stages of the implementation of a road map towards an independent Catalan state. For the Popular Unity Candidacy (CUP), an anti-capitalist party that is one of the prime movers in the independence project, a dream is being realised.

“If we want to implement anti-capitalist politics, we need sovereignty,” Quim Arrufat, head of international relations for the CUP, told The Irish Times. “It’s not only about having a state – Greece is a state and it doesn’t have sovereignty. But a state is a first step.”

CUP held the balance after a regional election in September which was treated as a plebiscite on independence. Junts pel Sí­ (Together for Yes), a separatist coalition, won, but fell short of a majority of seats in the Catalan parliament, its benchmark to push ahead with the plan to break from Spain.

CUP, with 10 seats in the 135-seat chamber, agreed to support Junts pel Sí­ only if Artur Mas stepped aside as the regional premier and figurehead of the independence movement. After more than three months of stalemate, all sides eventually agreed on a new regional premier, Carles Puigdemont, whose swearing-in last month was the starting gun for the road map.

“It’s an extraordinary situation – it isn’t normal,” said Arrufat. “It doesn’t happen in any other country: anti-capitalists agreeing on some points with Christian democrats because of a lack of sovereignty.”

But Arrufat said his party was determined to see this marriage of convenience through. “We don’t agree with the political programme of the Catalan government on normal issues – we don’t need to,” he said.

Instead, the partners in the independence drive are using the next year and a half to draw up laws allowing the creation of basic state structures, such as a Catalan tax authority and social security system. The plan then envisages another Catalan election being held, after which a constitution would be drawn up. Somewhere between six and 12 months later – in early or mid-2018 – that document would be put to a referendum and if approved, an independent republic of Catalonia would be declared.

“The purpose of this Catalan government is not to implement normal political measures on normal issues but just to work for 18 months to build the structures [of state],” Arrufat said. “So maybe – probably – during these 18 months, there will be some aspects of the government we don’t like in terms of health or education.”

Marta Pascal, a spokesperson for Convergence and deputy in the Catalan parliament, offers a similar interpretation of this peculiar alliance, highlighting the pragmatism needed to override any tensions.

Despite their shared target of independence, the potential for discord over issues such as the 2016 budget, which is being prepared, or the future of BCN World, a planned and much-queried megaleisure hub, is substantial.

CUP is all too aware of the power it holds. “We’re kingmakers and we have the right to bring down the government when we like and call new elections,” Arrufat said. The other major partner in the process, ERC, is playing a crucial role. Sergi Sabrià, an ERC deputy in the Catalan parliament, describes his party as “the glue” of the independence process.

Catalonia’s €68-billion debt is one area where ERC’s diplomacy is particularly needed, with the business-friendly Convergence determined to fulfil its financial obligations and CUP instinctively distrustful of the banking system. The compromise, for now, appears to be a debt audit.

But besides policy, another thorny issue for the movement is the role of former premier Mas, who is being deployed to promote independence on the international stage. Arrufat’s description of him as “a wounded animal” hardly bodes well for the secessionist cause’s unity. Nor does the fact that Mas has bitterly attacked CUP in recent weeks. But for now, at least, even the anti-capitalists appears prepared to exploit the strengths of the urbane, media-savvy former premier.

Despite the many challenges facing Catalan separatists, confidence is high, especially as they look to Madrid, where parties continue to wrangle over the formation of a new Spanish government, over two months after general elections.

“I’m absolutely confident in the sense that we know the Catalan people have been dreaming of this in recent years,” said Convergence’s Marta Pascal, when asked if Catalonia will gain independence. But CUP’s Arrufat is more equivocal – and perhaps more realistic – about achieving independence and support for the movement. Having received only 48 per cent of the popular vote in September’s election-plebiscite, he says the independence cause needs “five or 10 per cent” more backing before achieving its goal.