Cameron offers air base as Hollande builds coalition against Isis 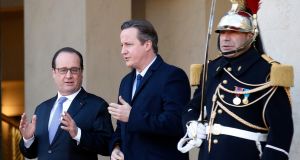 President Francois Hollande is retaliating with diplomatic and military means against Islamic State for the November 13th attacks that killed 130 people in Paris.

Mr Cameron paid an early-morning homage to the dead, with Mr Hollande and the mayor of Paris, Anne Hidalgo. Each laid a long-stemmed rose outside the Bataclan concert hall, where 89 were killed.

Yesterday, an explosives belt believed to have been abandoned by Salah Abdeslam, one of the attackers, was found in a public litter box in Montrouge, south of Paris. Abdeslam’s mobile telephone was detected near Montrouge before he fled to Belgium.

“The United Kingdom will do all in our power to support our friend and ally France to defeat this evil death cult,” Mr Cameron said at the Élysée.

Referring to the stepped-up air raids on Islamic State, also known as Isis, Mr Hollande said: “We will choose the targets that yield the best possible damage against the terrorist army.”

The arrival of the Charles de Gaulle in the eastern Mediterranean triples France’s strike force from 12 aircraft, based in Jordan and the United Arab Emirates, to 36.

Mr Cameron hopes the atrocities in Paris will help him win parliamentary approval for British intervention in Syria. (Britain already participates in attacks against Islamic State in Iraq. ) “Later this week I will set out in parliament our comprehensive strategy for tackling [Islamic State],” he said.

France believes two steps it has already completed will provide arguments to Mr Cameron and other leaders who want to strike at Islamic State. The UN Security Council passed resolution 2249 on November 20th, exactly one week after the Paris attacks. And EU defence ministers voted unanimously on November 17th to assist France under article 42.7 of the Treaty of Lisbon.

Resolution 2249 calls on UN member states to “take all necessary measures” against Islamic State. France would have preferred to invoke Chapter VII of the UN charter, which authorises military force, but feared getting bogged down in lengthy negotiations.

By November 29th, Mr Hollande will have met with the leaders of the other four permanent members of the Security Council. At the same time, he will engage in last-minute negotiations before the UN COP21 climate conference.

Mr Hollande will fly to Washington DC today to meet President Barack Obama. He will dine with the German chancellor, Angela Merkel, in Paris tomorrow. On Thursday, he will have breakfast with Italian prime minister Matteo Renzi, attend the France-Oceania summit and travel to Moscow to see President Vladimir Putin.

Mr Hollande built his career in the French socialist party as l’homme de la synthèse, who always managed to conciliate opposing views. He now hopes to bring the US and Russia together, though Washington insists that Syrian president Bashar al-Assad must step down, while Moscow wants him to remain in power for as long as possible.

“In Syria, we resolutely, tirelessly seek a political solution in which Bashar al-Assad cannot constitute the outcome, but our enemy in Syria is [Islamic State],” Mr Hollande said.

A source close to Mr Hollande now says “there is no reason to abandon one objective for the other. It was Islamic State that attacked France. That doesn’t mean we will make less effort to make Bashar leave.”

At Versailles, Mr Hollande said he was working to establish “a grand and unique coalition” to fight Islamic State. His entourage now prefer to speak of “co-ordination” through a “cluster of bilateral proposals” with France at the centre of that “cluster.”

“It is what you would expect of a country that was hit so hard,” an official said. “It was unspeakable what happened to us . . . We’re a country that is trying to react with its allies.”