Cameron makes case for air strikes on Isis in Syria 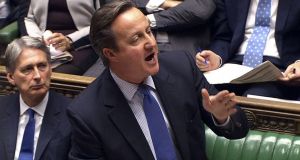 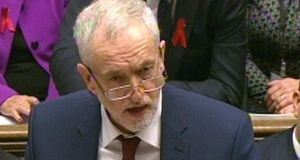 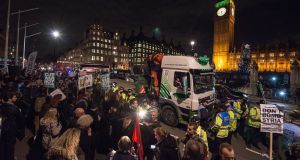 Police surround a truck after a demonstrator stopped it, and climbed underneath, during a protest outside the Houses of Parliament in central London against the British government’s proposed involvement in air strikes against the Islamic State group in Syria. Photograph: Chris Ratcliffe/AFP/Getty Images

British prime minister David Cameron has told MPs that attacking Islamic State in Syria is a moral and military duty that will strengthen diplomatic efforts to end the Syrian civil war and help to keep Britain safe.

Opening a debate lasting more than 10 hours in the House of Commons, the British prime minister described Islamic State, also known as Isis, as “woman-raping, Muslim-murdering, medieval monsters” who were determined to kill more British civilians.

“The question is this: do we work with our allies to degrade and destroy this threat and do we go after these terrorists in their heartlands, from where they are plotting to kill British people? Or do we sit back and wait for them to attack us?” he said.

Mr Cameron sought to address some of the most persistent questions surrounding the planned air strikes, including those around their effectiveness, and about the number of ground troops available to fight Islamic State in Syria.

Dismissing the suggestion that Britain’s contribution would make little difference to the aerial bombing campaign, he said the Royal Air Force already accounts for about a quarter of the precision bombing capability of the international coalition against Islamic State in Iraq. He also insisted that his estimate of 70,000 “moderate” Syrian forces opposed both to Isis and the regime of President Bashar al-Assad was a realistic one based on official intelligence reports and publicly accessible data.

“I am not arguing – this is a crucial point – that all of the 70,000 are somehow ideal partners. However, some left the Syrian army because of Assad’s brutality, and clearly they can play a role in the future of Syria. That view is also taken by the Russians, who are prepared to talk with these people,” he said.

“Whether it is a lack of strategy worth the name, the absence of credible ground troops, the missing diplomatic plan for a Syrian settlement, the failure to address the impact of the terrorist threat or the refugee crisis and civilian casualties, it is becoming increasingly clear that the prime minister’s proposals for military action simply do not stack up,” he said.

The Scottish National Party’s foreign policy spokesman Alex Salmond said that the 2003 invasion of Iraq had shown that the difficulty with military interventions is that “once we get in, it is hugely difficult to get out”. Noting that Mr Cameron had two years ago asked MPs to approve a bombing campaign against the Assad regime, he said the prime minister had failed to present a coherent military or political strategy.

“We are being asked to intervene in a bloody civil war of huge complexity without an exit strategy and no reasonable means of saying that we are going to make a difference. We should not give the prime minister that permission,” he said.

“If we can realistically do something to destroy or degrade that evil, and prevent it from spreading still further, we must act. That is a heavy burden of responsibility. This is not a choice between military intervention and political or diplomatic initiatives, because both go hand in hand,” he said.