Calais orders up to 1,000 residents of Jungle camp to leave 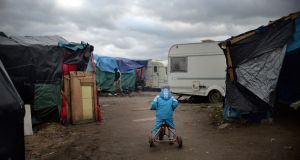 A file photo of a child in the Jungle refugee camp in Calais, France. Hundreds of migrants and refugees based at the camp have been ordered to leave next week or face eviction, local aid workers said. Photograph: PA 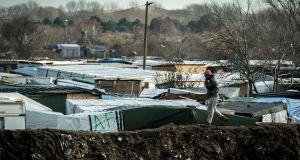 A migrant walks on an embankment of earth surrounding the Jungle migrants and refugee camp in Calais. Photograph: AFP 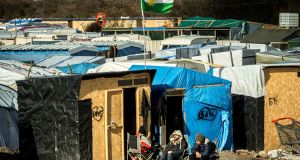 Men from Kurdistan sit in the sun outside their shelter on Friday in the Jungle migrants and refugee camp in Calais, northern France. Photograph: AFP

Hundreds of migrants and refugees based at the Jungle camp in Calais have been ordered to leave next week or face eviction, local aid workers said.

State authorities have given them until 7pm (Irish time) on Tuesday to leave their makeshift homes in the southern part of the squalid site.

Up to 1,000 people who have fled war, poverty and persecution are reported to be affected by the plans, but local aid workers say the figure could be much higher.

Pascal Froehly, who volunteers for the relief organisation Caritas, spoke of his concerns of heightened tensions being created if bulldozers move in to level the site.

He said: “I find it extremely annoying and unfair to move these people away from what they have created, including churches, shops and restaurants.”

Mr Froehly said the plans to move them to heated containers elsewhere in the camp offered the migrants and refugees no chance to socialise, adding: “It’s just a bed for them.”

Mayor of Calais Natacha Bouchart said the dismantling of the camp would keep migrants and refugees away from activists bent on causing disruption.

She said it was a “sensitive situation” that required “necessary firmness”. And she added the conditions endured at the Jungle were “unworthy of human nature”.

Plans to move people to heated containers in the camp and centres around France were announced by prefect Fabienne Buccio, the top official in France’s northern Pas-de-Calais region.

Ms Buccio said this month: “It’s time to tell the migrants of Calais who live in undignified conditions and give Calais an image that isn’t dignified either, that we have a solution for each of you.”

An estimated 4,000 migrants and refugees from countries including Syria, Afghanistan, Eritrea and Iraq are currently based within the sprawling Jungle.

This week 145 celebrities, including Idris Elba, Helena Bonham Carter and Benedict Cumberbatch, wrote an open letter calling on British prime minister David Cameron to help save children based there.

They want the British government to step in and allow unaccompanied children living in the camp to be reunited with their families in the UK.

Meanwhile, Eurotunnel has asked the British and French governments to reimburse it (€29 million) for lost revenue during the cross-channel migrant crisis.

The operator faced heavy disruption to its services last summer as migrants based at the Jungle made repeated bids to cross to Britain.