Opinion: Muslims’ visibility in dress reflects an ownership over their dual identities

Former French president and now presidential candidate Nicolas Sarkozy says he stands by his bid to ban the Burkini across the country. Video: Reuters 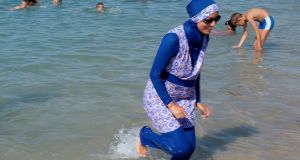 A woman wearing a burkini walks in the water on Saturday at a beach in Marseille in France, the day after the country’s highest administrative court suspended a ban on full-body burkini swimsuits. Photograph: Reuters 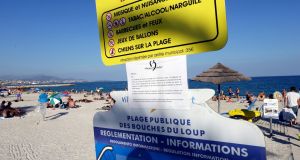 A bylaw forbidding women to wear burkini is posted on an information panel at a public beach in Villeneuve-Loubet, French Riviera, southern France. France’s top administrative court has overturned Villeneuve-Loubet’s burkini ban amid shock and anger worldwide after some Muslim women were ordered to remove body-concealing garments on French Riviera beaches. Photograph: AP

Europe’s increasingly intolerant debate about the burkini is puzzling to many European Muslims.

Liberal indignation at the sight of a Muslim woman in a swimsuit says far more about the fragile state of western secularism than it does the role of Islam in European societies.

To be clear: a burkini is not a burka.

It is a long swimsuit with a head covering. Its creator says that about 40 per cent of women buying burkinis are not Muslim. In the UK, the suit came to national attention in 2011 when it was worn by celebrity chef Nigella Lawson.

But in Europe today, conservative Islamic clothing has become a shibboleth for an age-old “clash of civilisations” between those who supposedly want to destroy the west and its hard-won freedoms and the defenders of the sacrosanct values of the Enlightenment.

The highest French administrative court might have suspended the ban on burkinis on some beaches but Muslim dress is often seen as a “provocation”, a threat to societal cohesion in a country that has suffered multiple terror attacks in the past two years.

The rhetoric is beginning to be echoed by political elites in Germany, which is moving closer to outlawing the burka in public spaces after one of its most senior ministers proclaimed the dress had no place in German society.

Proponents of clothing bans hail themselves as defenders of European civilisation and liberators of Muslim women from their patriarchal menfolk.

A covered woman, by this logic, is robbed of her agency - weak, oppressed and in need of the full armour of the state.

In banning the burkini, these newly emancipated women, it is hoped, will be emboldened to don the skimpy swimwear that is the apogee of the west’s freedom from institutionalised religion.

And yet, for all the muscularity of France’s laïcité , modest dress is proliferating rather than dying out among the country’s Muslims, a phenomenon that confounds secularists.

In one sense, the supporters of the ban are right: this is a clash of cultures. A clash between increasingly assertive European Muslims and fragile liberal democracies in the throes of a crisis of confidence.

This tension was neatly typified by Jean-Pierre Chevènement, the non-Muslim politician likely to head the new Foundation for French Islam, who urged Muslims to show “discretion” in public expression of their faith.

Mr Chevènement’s sensitivity is telling. Outward religious observance is not mounting evidence of radicalisation or the slow creep of intolerance. Most of those who commit acts of violence in the name of Islam barely have any grasp of the tenets of their faith.

Instead, the growing visibility of Muslims in western society reflects an ownership over their European and Muslim identities in a manner their first-generation immigrant parents and grandparents did not dare display.

A headscarf is a mark of self-confidence not illiberalism. The Islam practised by many young European Muslims today is flexible, tolerant and accepting of the west’s prevailing norms, whether on homosexuality, abortion or atheism.

The burkini has gained prominence in recent years because Muslim women make Islam work for them: at the beach, in the workplace or at the Olympic Games. Previous generations, including my mother, would never have thought of going to the beach.

Fixation on the perceived enemy within is a symptom of a wider societal malaise: one that does not seem robust enough to tolerate a conservative morality that has been a feature of Europe’s social fabric for centuries.

Mired in economic stagnation, with frustrated populaces and mistrust of its political elites, Europe faces no bigger challenge to its freedom and democracy than to decide whether or not it can tolerate anything other than itself.