Brussels suicide bomber note: ‘I don’t know what to do’ 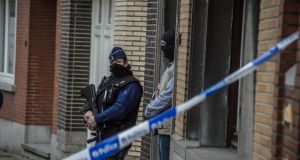 Belgian police secure a house during a police search in Brussels. A raid in the Schaerbeek area turned up a note left by suicide bomber, Brahim El Bakraoui. Photograph: Christophe Petit Tesson/EPA

One of the suicide bombers who launched a deadly attack at Brussels airport left a note in which he said: “I don’t know what to do”.

Prosecutor Frederic Van Leeuw said Belgian national Brahim El Bakraoui was identified by his fingerprints as having carried out the suicide attack at the airport on Tuesday morning.

Mr Van Leeuw said a note was found on a computer in a bin during a raid in Schaerbeek in which El Bakraoui wrote: “Being in a hurry, I don’t know what to do, being searched for everywhere, not being safe, if it drags on it could end up with me in a prison cell next to him”, which French media have reported is a reference to suspected Paris attacker Salah Abdeslam.

Mr Van Leeuw confirmed that Belgian national Brahim El Bakraoui was one of the men pictured in a photo from Brussels airport issued by police on Tuesday.

Ibrahim’s brother, Khalid El Bakraoui, (27), also a Belgian national, was named by Mr Van Leeuw as having carried out the bomb attack on a train at Maelbeek station.

He said: “The suicide bomber was identified by his fingerprints, it was Khalid El Bakraoui, the brother of Brahim.

“The two dead terrorists had large police files, but not linked to terrorism.”

Khalid El Bakraoui is listed as wanted by the Interpol website for “terrorist activities”.