Ability to feel Irish or British or both ‘will be destroyed’ , says Jonathan Powell 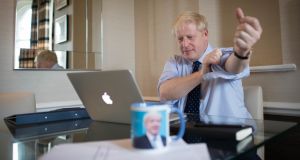 He told BBC’s Newsnight: They are “trying to avoid a deal in order to get to no deal as they were always going to do. This is the final confirmation that’s their aim.”

Powell also said the ability to feel Irish or British or both – a key part of the Good Friday agreement – “will be destroyed” if a customs border is put in. “The point of this is not how long it takes a lorry to cross the border in Northern Ireland. The issue is identity.”

The main ingredients of Johnson’s plan, to be outlined on Wednesday in his Tory party conference speech, are a proposal for “two borders for four years” and a “Stormont Lock”. After the transition period comes to an end, Northern Ireland would stay in the single market for four years but, crucially, not in the customs union.

“It is not a serious proposal and presumably what they’re doing is simply trying to avoid a deal to get to no-deal.”

That would mean that there would be a single market for the whole of Ireland for agri-food and manufactured goods until 2025. It would also mean other goods originating from the North would be subject to customs checks once they crossed the border into the EU.

Elsewhere yesterday, Boris Johnson is overseeing a political strategy similar to Donald Trump, the former Tory minister David Gauke has said, as he warned the Conservatives not to descend down a path of populism.

The former justice secretary, who lost the whip after voting to stop a no-deal Brexit, voiced his frustration with the prime minister’s strategy, which he said was “Trumpian” in terms of the type of language being used and the overall tone of debate.

A divisive Downing Street, briefings using the phrase “collaborator” and riling up party activists all belong to a strategy that “corresponds more to Trump than to the long tradition of the Conservatives and Winston Churchill”, he told the Guardian.

Gauke is no longer able to stand as a Conservative MP, alongside 20 other rebels who were kicked out of the parliamentary Tory party for voting for the Benn Act, which stops a no-deal Brexit and compels Johnson to extend article 50 if he cannot strike a deal, and to pass it through parliament by October 19th.

Several members of the group, including the former chancellor Philip Hammond, are being investigated by Downing Street, which alleges they worked with foreign powers to draft the legislation.

Gauke said the announcement of that investigation, which featured on the front page of the Mail on Sunday, was full of “Trumpian overtones” – primarily “because it’s not true”. – Guardian, PA