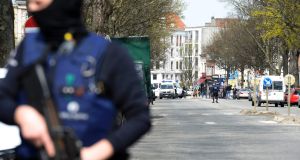 Belgian police officers stand guard in a street in Etterbeek, Brussels, as part of the investigation into the November 13th Paris attacks in which 130 died and the March 22 attacks which left 32 dead in Brussels.Photograph: AFP/Getty Images

The planners behind the March 22nd bombings in Brussels which killed 32 people had initially planned to attack Paris but struck closer to home as investigators made arrests among key suspects, Belgian prosecutors said.

“Numerous elements in the investigation have shown that the terrorist group initially had the intention to strike in France again,” Belgium’s federal prosecutor said in a statement on Sunday.

“Surprised by the speed of progress in the investigation, they took the decision to strike in Brussels,” the statement added.

Sunday’s statement provides confirmation of what many have suspected: the series of raids and arrests in the week leading up to the Brussels attacks — including the capture of key Paris attacks’ fugitive Salah Abdeslam — pushed the killers to action.

On Saturday, Belgian authorities charged four men with participating in “terrorist murders” and the “activities of a terrorist group” in relation to the Brussels’ attacks.

One of them, Mohamed Abrini, has also been charged in relation to the Paris attacks, prosecutors said.

Mr Abrini has been identified as the “man in the hat” spotted alongside the two suicide bombers who blew themselves up at Brussels Airport. Surveillance footage has also placed him in the convoy with the attackers who headed to Paris ahead of the November 13th massacre.

Mr Abrini was a childhood friend of Brussels’ brothers Salah and Brahim Abdeslam, both suspects in the Paris attacks, and he had ties to Abdelhamid Abaaoud, the Paris attackers’ ringleader who died in a French police raid shortly afterwards. Brahim Abdeslam blew himself up in the Paris bombings while Salah Abdeslam was arrested in Brussels on March 18th— four days before the attacks there — after a four-month manhunt.

Mr Abrini’s fingerprints and DNA were not only in a Renault Clio used in the Paris attacks but also in an apartment in the Schaerbeek neighbourhood of Brussels that was used by the airport bombers.

Mr Abrini was also believed to have travelled to Syria, where his younger brother died in 2014 in the Islamic State’s Francophone brigade. The other suspects charged Saturday were identified as Osama Krayem, Herve B. M. and Bilal E. M. Krayem is known to have left the Swedish city of Malmo to fight in Syria.

The weekend’s developments represent a rare success for Belgian authorities, who have been repeatedly criticised for bungling the bombings investigation. Despite the arrests and charges, Brussels remains under the second-highest terror alert, meaning an attack is still considered likely. “There are perhaps other cells that are sti