There has been a ‘catastrophic misreading’ of Moscow’s position, says Lords committee 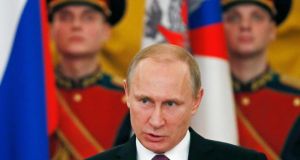 Britain and the European Union made a “catastrophic misreading” of Russia and President Vladimir Putin and “sleepwalked” into the Ukraine crisis, treating it as a trade issue rather than as a delicate foreign-policy challenge, a House of Lords committee said in a scathing report.

For too long, the EU’s relationship with Moscow had been predicated on the “optimistic premise” that Russia was becoming a democratic, law-abiding country, the report said, rendering member nations insensitive to the degree of Russian hostility toward EU efforts to negotiate a closer political and economic relationship, known as an “association agreement,” with Ukraine.

European states “have been slow to reappraise the relationship and to adapt to the realities of the Russia we have today,” the report said, and lack a long-term strategic response. The analytical failure and “glaring absence of political oversight” was compounded by a decline in Russia expertise and analysis in Britain and across the EU, the report said.

“A loss of collective analytical capacity has weakened member states’ ability to read the political shifts in Russia and to offer an authoritative response,” it said. The report concluded that the EU had failed to appreciate “the exceptional nature” of Ukraine and its relationship to a more aggressive Russia in Putin’s latest term as president. While the policy of the United States was not a direct topic for the report, the same criticism was implicit. – (New York Times)

4 Remote-working ‘revolution’ bringing people back to towns and villages