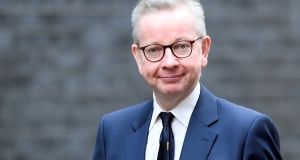 A new £650 million Brexit support and peace and reconciliation package for Northern Ireland was announced by British Cabinet Office Minister Michael Gove who was visiting the North on Friday.

The funding comprises £300 million of support for the European Union’s Peace Plus programme and £355 million to assist traders in the North deal with the complications of Brexit.

Of the £355 million the package involves £200 million towards a new free-to-use Trader Support Service that will assist with import, safety and security declarations on behalf of traders.

The other £155 million, according to Mr Gove’s office, will fund the development of new technology to ensure the new processes can be fully digital and streamlined.

Mr Gove’s department said the “new service will be available to businesses bringing in goods from Great Britain or the rest of the world, providing guidance as well as dealing with their requirements for moving goods into Northern Ireland”.

The £300 million confirmed by Mr Gove for the Peace Plus programme will help “to support peace, prosperity and reconciliation projects on the island of Ireland”.

Mr Gove who, accompanied by Northern Secretary Brandon Lewis, was visiting Northern Ireland on Friday, said the £650 million investment underlined the British government’s “absolute commitment to the people and businesses of Northern Ireland as we move towards the end of the transition period”.

“Our new free-to-use Trader Support Service will provide vital support and guidance to traders, while our £300 million investment in reconciliation projects will help to preserve the huge gains from the peace process and the Belfast Agreement,” he said.

“As we continue to engage with businesses, and our discussions with the EU proceed, we will update these resources to ensure that traders are ready for the end of the transition period,” added Mr Gove.

Mr Lewis said the Trader Support Service “will ensure that businesses of all sizes can have import processes dealt with on their behalf, at no cost”.