Brexit: EU wants Britain to leave ‘as soon as possible’

Top officials want UK to invoke Article 50, ‘however painful that process may be’ 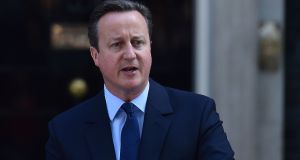 British prime Minister David Cameron said Britain should only give its formal notice of leaving the EU when a new leader is in place. Photograph: Ben Stansall/AFP/Getty Images

The comments put the EU at odds with British prime minister David Cameron who said this morning he expects the British government to invoke Article 50 of the EU treaty only when a new leader is in place.

Article 50 is a clause in the Lisbon Treaty that sets out the legal process for a country notifying the EU that it intends withdraw. Once notification is given, negotiations must be concluded within 2 years, with any extension requiring the agreement of all EU members.

In a joint statement by the heads of the European Commission, Parliament and Council on Friday, the EU’s top officials said that “any delay would unnecessarily prolong uncertainty”.

“We now expect the United Kingdom government to give effect to this decision of the British people as soon as possible, however painful that process may be.”

After emergency talks in Brussels, they said they regretted, but respected Britain’s decision.

“This is an unprecedented situation, but we are united in our response,” they said in a joint statement.

The EU’s robust response was in line with comments from Manfred Weber, head of the European Parliament’s largest political party, the EPP who said that the EU cannot wait for the Conservative party to replace David Cameron.

“Exit negotiations should be concluded within two years at max. There cannot be any special treatment. Leave means leave.”

EU leaders are due in Brussels next week for a pre-scheduled summit on Tuesday and Wednesday. In addition, the EU’s 27 leaders will meet without the British prime minister on the sidelines of the summit.

Asked if the British vote was the “beginning of the end of the EU”, European Commission president Jean-Claude Juncker replied “No”, and immediately left a press conference in the European commission headquarters in Brussels.

While the UK - the first sovereign country to vote to leave - would remain a member until exit negotiations were concluded, they said, Europe expected it to “give effect to this decision . . . as soon as possible” by triggering article 50 of the Lisbon treaty, which is effectively Britain’s formal letter of resignation.

In Berlin, the German chancellor, Angela Merkel, expressed “great regret” at Britain’s decision, but said the EU should not draw “quick and simple conclusions” that might create new and deeper divisions.

The union’s foundation was “the idea of peace”, she said.

Speaking in Paris, the French president, François Hollande, said he “profoundly regrets” the Brexit vote but that the EU now had to make changes.

In a brief televised statement, Mr Hollande said the vote would put Europe to the test: “To move forward, Europe cannot act as before.”