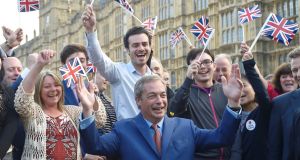 A campaign for a second EU referendum caused the House of Commons petitions website to crash after it experienced a higher volume of simultaneous users than ever before.

A House of Commons spokeswoman said: “The site was temporarily down due to exceptionally high volumes of simultaneous users on a single petition, significantly higher than on any previous occasion.

“UK parliament and the Government Digital Service are aware of the issue and are working hard to resolve the problems as quickly as possible.”

The page, set up by William Oliver Healey, reads: “We the undersigned call upon HM Government to implement a rule that if the Remain or Leave vote is less than 60 per cent based on a turnout less than 75 per cent, there should be another referendum.”

If a petition receives more than 100,000 signatures, they will be considered for debate in parliament.

The Petitions Committee considers all petitions that have received 100,000 signatures by Friday afternoon, at its subsequent meeting.

The next meeting is on Tuesday, where the committee has the power to schedule petitions for debate in Westminster Hall on a Monday from 4.30pm, for up to three hours.