Bram Stoker a hero for struggling corner of Romania

Locals grateful to Dracula author for attracting tourists to Transylvania 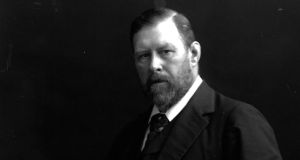 Far from resenting the vampire myth, people in Transylvania regard Bram Stoker as a hero. Photograph: Hulton Archive/Getty Images

The medieval town of Sighisoara in the heart of Transylvania is breathtakingly beautiful. Its narrow, cobbled streets, its brightly coloured houses, the atmospheric square dominated by an imposing clock tower seem to have emerged straight from the pages of a fairy tale.

Yet thanks to Bram Stoker, a Dubliner who never visited the place, this Unesco world heritage site is best known outside Romania as the home town of Dracula. Far from resenting the vampire myth, locals regard Stoker as a hero who has probably done more for the country’s tourist industry than anybody else.

Tourists on the Dracula trail inevitably end up in Sighisoara the town where Vlad the Impaler, the inspiration for Bram Stoker’s anti-hero, was born and spent his childhood. Best known for allegedly impaling 30,000 enemy Turks in the 1450s, Vlad is regarded as a hero in modern Romania.

“It is not because he impaled the Turks but he did the same to criminals and corrupt officials. They say people could leave their doors open at night when he ruled. That is what we long for now,” said one Romanian.

Corruption Like many others he believes that one of the biggest problems facing the country today is the corruption that permeates the political, bureaucratic and judicial system.

For tourists, though, the striking features of Transylvania are its wild mountains, which still give refuge to bears and wolves; its gentle countryside; and its charming towns.

Vlad’s home town of Sighisoara is just one of a number of medieval towns founded by German settlers from the 12th century onwards that dot the landscape.

Cities such as Brasov, Sibiu and Cluj and a number of fortified villages are a testament to a now vanished group of people, known in Romania as the Saxons, who inhabited the region from the 1190s up to recent times. Most of them returned to their ancestral homeland in the 1980s.

The rolling countryside with the dizzying heights of the Carpathian mountains always visible in the distance add to the distinctive character of the region. Farming practices have changed little for generations, with small fields of potatoes, barley, oats and corn interspersed with bigger ones containing cattle and sheep. Men cycle the roads to and from their small holdings carrying scythes on their shoulders, while women work in the fields hoeing and weeding. The lush meadows of natural grasses interspersed with flowering plants of all descriptions are a nostalgic reminder of what rural Ireland was like before the advent of modern farming.

Prince Charles has bought land in Transylvania to preserve a kind of farming that has vanished in western Europe. Part of the attraction for him was the warm, friendly welcome he received from ordinary people who had no idea who he was.

While the survival of pre- industrial farming is part of the attraction for tourists the downside for the locals is that the standard of living naturally trails that of western Europe.

The net result is that there has been a massive wave of emigration from Romania since the revolution that overthrew the communist dictatorship of Nicolae Ceausescu in 1989. The population has fallen from about 23 million in the 1990s to just over 20 million today. The biggest number of emigrants have gone to Italy but they are now to be found in most of the developed world. It is estimated that about 40,000 Romanians are living in Ireland.

Romania is how it can retain the positive aspects of its heritage while providing reasonably well-paid jobs for its people. The oft-heard refrain is that in communist times people had plenty of money but there was nothing to buy in the shops. Now the shops have everything but most people don’t have the money to buy what they want.

One individual trying to turn the tide is Arnold Klingeis, the young mayor of the town of Avrig. He has worked to develop tourism in area and has now produced an ambitious plan to develop sustainable energy from biomass.

Kingleis is hoping to get EU funding for a feasibility study for his project, which he says will create 2,500 jobs. The attractive aspect of the plan is that the jobs would be created at all levels from unskilled labour to highly qualified scientists. His drive and enthusiasm are in sharp contract to the bureaucratic incompetence that has left the country drawing down less than a third of the EU funds to which it is entitled.

If his plan gets off the ground it could point the way for a sustainable future that not only appeals to tourists but also provides a decent living for the people of Transylvania.