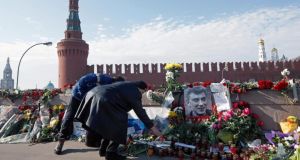 People lay flowers at the spot where Russian opposition politician Boris Nemtsov was murdered near the Kremlin on Grand Moskvorestsky bridge in Moscow. Photograph: Sergei Chirikov/EPA

A mound of rain-drenched flowers still marks the place on the bridge near the Kremlin where Boris Nemtsov, the Russian opposition leader, was shot dead two weeks ago in a brazen murder that speaks of savage undercurrents roiling the country’s political life.

Russian law enforcers have made rapid progress in their investigation into the crime. Two men from Chechnya, a mainly Muslim republic in Russia’s restive North Caucasus, have been charged with killing Nemtsov and three more suspects remain in custody at Moscow’s high security Lefortovo jail.

But for colleagues of Nemtsov, it’s not important who pulled the trigger. They’re demanding that investigators uncover the “contractors”, the people who ordered and orchestrated the killing of one of Vladimir Putin’s fiercest critics.

The European Parliament added its voice to calls for an international inquiry this week, describing the shooting of Nemtsov as “the most significant political murder in recent Russian history”.

Many Russians will accept that Chechens murdered Nemtsov, but not that the killers were acting of their own volition, said former prime minister Mikhail Kasyanov, who co-founded the Parnas opposition party with Nemtsov.

“Investigators are trying everything to get away from the fact that it was a political killing and find a version that is more or less acceptable to society.”

Nemtsov was shot dead while walking across a bridge near the Kremlin after dining with his Ukrainian girlfriend in a restaurant on February 27th.

In the days after the murder, Russian state media swirled with conspiracy theories suggesting that Ukrainian nationalists or US secret services seeking to discredit the Kremlin, or even Islamist extremists, were responsible. The killer could even have had a domestic motive – Nemtsov was famous for his colourful private life.

The indictment of Zaur Dadayev, a Chechen soldier, who was dragged by heavily armed police into a Moscow court last Sunday to face charges of murder, has added weight to the narrative of a religious motive. Russia’s Investigation Committee says it has information that Nemtsov had received threats related to his position on the terrorist attack on the Charlie Hebdo journalists in Paris.

Visited by rights activists in Lefortovo this week, Dadayev claimed he had confessed to killing Nemtsov under duress and had bruises to show for it. In conversation with Andrei Babushkin, a member of the Kremlin’s human rights commission, the Chechen said he had been fired from the North battalion on February 28th, one day after the murder of Nemtsov, but gave no reason for his dismissal. “In the space of one week I have gone from being a hero to a dangerous criminal,” he said.

Dadayev has a powerful ally in Ramzan Kadyrov, the Chechen president, who, writing on Instagram this week, described him as a “true patriot” who would “never do anything to hurt Russia”. Dadayev was also a devout Muslim who had been shocked by the Charlie Hebdo cartoons of the Prophet Muhammad, Kadyrov added.

Most Russian commentators agree that that if it was Dadayev who killed Nemtsov, he was most likely acting on orders rather than his own initiative.

Although officially part of the Russian interior ministry, the North battalion is manned largely by members of the Chechen presidential guard and holds allegiance to Kadyrov, according to Oleg Orlov, the head of the Memorial Human Rights Centre.

“A killer would have to be crazy to conduct such a super high profile murder without approval from above,” he wrote on his blog on the Echo Moskvy radio station website.

Kadyrov swept into the political limelight after the assassination in 2004 of his father, Akhmad Kadyrov, the then Chechen president. Putin needed a faithful cohort to represent the Kremlin’s interests in the intricate power struggles between rival clans and warlords in Chechnya, where Russia has fought two bitter wars since the Soviet Union collapsed. Ruthlessly ambitious and charismatic, Kadyrov fitted the bill.

International rights groups have accused Kadyrov of presiding over a brutal regime in Chechnya and of abusing his authority, to enrich his family and friends. But in Putin’s eyes Kadyrov has proved his worth, bringing relative stability to Chechnya and overseeing a massive Kremlin-funded war restoration works in the republic, including the construction of Europe’s biggest mosque.

Above all else, Putin demands total loyalty from associates and Kadyrov delivers in spades.“We are the foot soldiers of the president of Russia,” he wrote on Instagram this week. “To give your life for such a person is the lightest of tasks.”

There was ample reason for Kadyrov to dislike Nemtsov, who frequently criticised the Kremlin for lavishing funds on Chechnya while other Russian regions languished in poverty.

Nemtsov had flagged reports Chechen security forces were fighting alongside pro-Russian rebels in eastern Ukraine, allegedly with Kadyrov’s blessing. Putin denies that Russia has provided military support to Ukraine and says Russian soldiers there are “volunteers”.

The decision to charge one of Kadyrov’s close allies with the Nemtsov murder has given rise to speculation that the Kremlin is finally losing patience with the Chechen president. Some say a battle is brewing between rival factions in the powerful siloviki, or secret services, torn between loyalty to Putin and resentment about the free rein he has given Kadyrov.

Putin included the Chechen leader on a list of 200 people bestowed with civilian awards this week. Kadyrov was singled out for the Order of Honour, for “work achievements, strenuous social activities and long, conscientious service”.

But Kadyrov is becoming an increasing liability. Putin, who has cancelled several engagements and has not been seen in public for almost a week, is facing “one of the most serious choices of his life”, wrote Stanislav Belkovsky, a Russian political analyst, on the Snob online newspaper. “The siloviki’s conviction that Kadyrov ordered the murder of Nemtsov is a major blow to Vladimir Putin. ”