Bono to address EPP summit on Europe’s role in world

U2 singer invited to speak by Taoiseach Enda Kenny 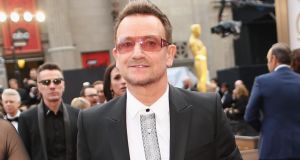 Bono will attend the event on foot of an invitation from Taoiseach Enda Kenny and speak on Europe’s role in the world. Photograph: Getty

Bono will attend the event on foot of an invitation from Taoiseach Enda Kenny and speak on Europe’s role in the world. He will stress that his engagement with EPP leaders is non-partisan politically and part of his ongoing dialogue with global leaders.

Bono will attend as a representative of the One campaign against extreme poverty, a group which argues that it is crucial for European leaders to introduce measures to make it more difficult to move money secretly around the world.

The One campaign believes money secretly moved from sub-Saharan Africa through the financial system amounts to some €38.6bn per year, greater than the €29.8 billion the region receives in developmental aid from wealthy western countries.

Bono will call at the EPP meeting for action in European law to introduce public registers of the ownership of “phantom firms” and off-shore companies and trusts.

“Right now your ministers . . . and your members of the European Parliament. are working on another law that could help transform the lives for the poor, and the rest of us, too,” he will say.

“It’s a law to inject daylight into the financial system to stop corrupt monies vanishing to ‘safe’ havens and combat money laundering.”

He’s also expected to praise recent initiatives to foster transparency in the trading of minerals, and say that the European politicians did something remarkable last year by passing laws which mean that “wealth under the ground” is more likely to benefit citizens of countries which are resource rich yet economically poor.

“Legislation that requires oil, gas, and mining companies to tell us how much money they pay to governments in countries – mostly poor countries – where they operate,” he will say.

“The values bound up in the legislation are justice, fairness and responsibility to stop playing our part in this corruption.”