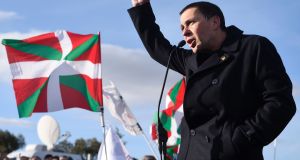 Arnaldo Otegi, a leading figure of the Basque independence movement who has long been seen as a major influence on the terrorist group Eta, has been freed after six years in prison.

Mr Otegi (57) was jailed in October 2009 for attempting to re-establish Herri Batasuna, a political party which had been banned for its alleged links to Eta.

However, he was instrumental in persuading Eta to end its campaign of violence and Basque nationalists claim he has been a political prisoner.

“They say that in Spain there are no political prisoners, but you just have to look at the number of cameras here to see that yes, they do exist,” said Mr Otegi moments after his release from prison in Logroño, in northern Spain.

His wife and family were waiting to receive him, along with supporters who chanted and waved the Basque ikurriña flag.

Mr Otegi has been active in the Basque separatist left since the 1970s and has served several jail terms, starting in 1987, when he was imprisoned for taking part in an Eta kidnapping.

Following his release he became involved in Herri Batasuna, which was seen as the political arm of Eta, and by the late 1990s he had become the party’s leader.

Although for many Spaniards Mr Otegi represents the terror of Eta, he is seen as a key figure in moving the Basque separatist left away from violence in its quest for an independent Basque state.

He was closely involved in a failed 2006 peace process involving the Socialist government of José Luis Rodríguez Zapatero and his influence was crucial in persuading Eta to declare a permanent ceasefire in 2011 after a four-decade campaign of violence.

Since his 2009 imprisonment, a campaign for his release has gathered force, gaining the support of international figures.

Archbishop Desmond Tutu is among those who have called for his release, as have Gerry Adams and US activist-philosopher Noam Chomsky.

Other Irish figures who have joined the campaign include Nobel Prize winner Mairead Maguire and Harold Good, president of the Irish Methodist Church.

However, there are many who have opposed the campaign to free Mr Otegi. The AVT terrorism victims’ association tweeted: “Hurt and outrage on seeing how an Eta terrorist is received as a hero on his release.”

Mr Otegi is now expected to return to the political front line and he is likely to run for the post of Basque regional premier for the EH Bildu coalition in elections scheduled for this autumn, providing he can overcome legal barriers.

Meanwhile, the Spanish authorities continue to view him with distrust.

The government called for the cancellation of a tribute to the separatist leader to be held later today in his hometown of Elgoibar and another on Saturday in San Sebastián, warning they might amount to the “glorification” of terrorism.

However, the High Court has instead called for security forces to watch both events closely.