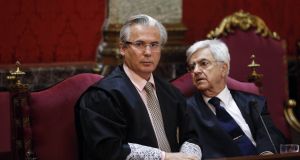 Spanish judge Baltasar Garzón has criticised the terrorism charges brought against a group of young people accused of involvement in the attack of two civil guards last year in a bar in northern Spain. Photograph: Andrea Comas/Reuters

A court case against a group of young people accused of involvement in the beating up of two civil guards last year in a bar in northern Spain has brought back memories of separatist violence and put the country’s judiciary under scrutiny.

In October 2016, a lieutenant and a sergeant posted to the civil guard base in the town of Alsasua, in the Navarre region, went to a local bar with their girlfriends. Allegedly, several young people in the bar insulted the officers and then attacked them, sparking a fight which saw one of the civil guards suffer a broken ankle.

Although a local court saw it as a straightforward assault case, the high court disagreed, accepting prosecutors’ demands that the eight defendants be tried on terrorism-related charges. As a result, six of them could face jail sentences of up to 50 years each, another could be jailed for 62 years due to an additional charge of terrorist threats and the only woman among the defendants faces a sentence of up to 12½ years, for terrorist threats.

Last week it was announced that the trial will begin in April and on Sunday supporters of the defendants staged a demonstration in Alsasua calling for the terrorist charges to be dropped. The protest also called for three of the defendants, who have been in jail pending trial for the last year, to be freed.

“The words disproportionate and unjust barely scratch the surface,” said Altsasu Gurasoak, a platform created by relatives of the defendants to denounce the judicial process and which has organised regular demonstrations in the town.

The Navarre region borders the Basque Country and has traditionally been seen by Basque nationalists as part of their historic homeland. Terrorist group Eta waged much of its campaign of violence in the region, which explains the tough sentences the defendants could face.

The prosecutor sees the incident last October not as a typical bar brawl, but as a throwback to the days when Eta sympathisers intimidated members of the Spanish security forces in Navarre and the Basque Country. Such pressure was part of a campaign known as Alde Hemendik (“Get out of here”) and it characterised the tensions and divisions that existed during Eta’s four decades of violence.

Prosecutors have made express reference to Eta in their case against the eight youths, accusing them of continuing the Alde Hemendik campaign by seeking “to create a climate of fear and rejection among citizens, inciting them […] to have no emotional link, be it via friendship or plain courtesy, with members of the civil guard.”

Last week, José Antonio Nieto, an undersecretary in the interior ministry, defended the judicial action in the Alsasua case before the Spanish senate, putting it in the context of Eta’s violence.

“This [incident] happened after a longstanding conflict full of controversies we all know about and in which the civil guard has had a major role,” he said.

However, families of the defendants and others have highlighted what they say are technical flaws in the prosecutors’ case. They also point out that Eta formally ended its terrorist campaign, which killed more than 800 people, in 2011 and that the organisation’s violence is irrelevant in the Alsasua case.

“Eta is history for these kids,” one of their lawyers said earlier this month.

When the prosecutor’s charges were announced last July, Baltasar Garzón, a well-known former magistrate who has pursued many Eta terrorists, as well as Chilean dictator Augusto Pinochet and Osama Bin Laden, decried the case.

“Qualifying this as terrorist conduct is a judicial inconsistency of enormous dimensions and it shows the weakness of the magistrate’s arguments,” he wrote in El País newspaper. He also warned that the case undermined the peace achieved in the Basque Country since the end of Eta’s violence.

In July, 52 members of the EU parliament wrote to the president of the European Commission, Jean-Claude Juncker, describing the sentences being demanded by prosecutors in the Alsasua case as “undemocratic” and calling on him to intervene.

Adding to the intrigue is the fact that the high court judge handling the case is Carmen Lamela, who has been responsible for much of the recent legal action against Catalan independence leaders, including jailing eight of them last month pending trial.