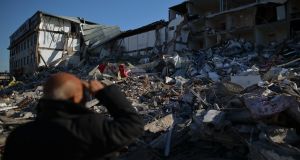 After a fire broke out on November 19th at an apartment in the Daxing district killing 19 people, Beijing’s government launched a campaign to eliminate fire hazards. Photograph: Wu Hong/EPA

As winter temperatures freeze the Chinese capital, the eviction of tens of thousands of migrant workers and the sudden demolition of unapproved housing has prompted an emotional response from many Beijing residents.

The crackdown follows a fire on November 18th that killed 19 people in a textile-manufacturing sector of Beijing but the pace at which the evictions are taking place has shocked many people.

China’s hundreds of millions of migrant workers are the unsung heroes of the country’s economic miracle, building skyscrapers, assembling cars, waiting on tables in fine restaurants and cleaning the homes of the middle classes, and one aspect of the evictions that has particularly angered Beijingers is the use of the phrase “low-end population” to describe the victims.

A young woman who requested anonymity told The Irish Times what had always made Beijing so special was that the poor – the same “low-end” people – were able to make a living and not become desperate with life.

“The true international metropolis is never about environment and infrastructure, it is about people. Beijing used to be a place that included all social classes, diverse and tolerant,” she said.

Another Beijing resident called Jason formerly worked at a school in the city where a lucky few migrant children were allowed to study.

“I don’t know if those kids have a place to live now,” he said.

At last month’s Communist Party congress, President Xi Jinping promised in his second term as supreme leader to focus on achieving the “China Dream” of a moderately prosperous society, and on improving quality of life ahead of breakneck economic expansion.

Beijing has a population of about 21 million, many of them migrant workers without residence permits who are excluded from the benefits afforded to Beijing natives, such as access to housing and healthcare. The buildings being demolished are unapproved shops and flats tacked on to existing housing.

On social media, one writer posted: “Beijing welcomes you!” Already many negative online comments online have fallen foul of the Great Firewall of China, as the government does not want feelings of dissatisfaction to turn into anything more disruptive, but anger lingers.

Not everyone has been so sympathetic, saying it was high time that these potentially dangerous buildings were knocked down.

“Those buildings are not legit, they are endangered buildings and they should have been evacuated a long time ago,” wrote Tiger Wang89.

Public officials say that the evictions were necessary to ensure safety. Xu Weiben, a government official in the Dongzhimen section of town, said that illegal buildings were a hazard.

“Had there been a fire, the fire engines would have been unable to enter some narrow alleys,” Mr Xu told the Global Times.

However, the evictions, which form part of a broader project to gentrify the city, coincide with a growing scandal involving alleged child abuse at kindergartens in the city and a feeling of a lack of public concern for the wellbeing of the populace.

Some Beijingers have opened impromptu drop-in centres to help migrant workers find somewhere to stay and more than 100 Chinese intellectuals and artists wrote an open letter condemning what they described as a “ruthless” campaign of evictions against migrant workers in the city.

The crackdown has reminded the middle classes of the city of the migrant workers who have contributed so much to the fabric of life in the city.

“I remember the helper I had when I was young – I was like her baby and she is like family to me. I spoke to her today and found she has been moved as well. I invited her to come to my place, but she said no. Now she has to move in with her son,” said Hang Liang.