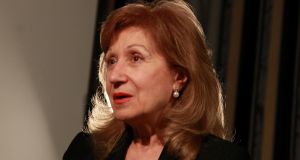 Ekaterina Trendafilova, president of new EU-backed court at The Hague that will hear cases of alleged war crimes stemming from the conflict in Kosovo. Photograph: Hazir Reka/Europe

As the United Nations tribunal for former Yugoslavia prepares to close, a new EU-backed court at is ready to start hearing cases of alleged war crimes stemming from the conflict in Kosovo, according to its Dublin-born registrar.

Fidelma Donlon said the Kosovo specialist chambers in The Hague are “judicially ready, the legal framework has been drafted and adopted, and now we have to wait for the independent specialist prosecutor to file” the first indictment.

In 1998 and 1999, fighting between rebels and government troops in the then Serbian region killed some 13,000 people and displaced about one million – most from Kosovo’s 90 per cent ethnic Albanian majority – before Nato bombing drove out Belgrade’s forces and a UN mission took control.

Kosovo declared independence in 2008 and has been recognised as a state by more than 100 countries, but Serbia rejects its sovereignty and accuses ex-guerrillas – including Kosovar president Hashim Thaci and other top politicians – of war crimes.

The specialist chambers stem from a 2011 report by the Council of Europe that linked senior figures in the rebel Kosovo Liberation Army to the torture and murder of Serbs during and immediately after the war, and to the possible harvesting of prisoners’ organs for sale on the black market.

Kosovo’s parliament approved the creation of the chambers in 2015 and formally they are part of its judicial system, despite being located in the Netherlands and staffed by international employees.

“Our mandate is to ensure safe and secure proceedings in an environment that is conducive to the administration of justice,” Dr Donlon said on Friday during a visit to Kosovo with the court’s Bulgarian president, Ekaterina Trendafilova.

Amid intense speculation in Kosovo and Serbia over who will be indicted by David Schwendiman, the court’s US chief prosecutor, Mr Thaci has already accused it of favouring Belgrade and being part of an “unfair historical process for Kosovo”.

Many Serbs hope the chambers will redress what they see as the bias of the UN war crimes court, which will close next month following this week’s conviction of former Bosnian Serb commander Ratko Mladic for the 1995 Srebrenica genocide.

Dr Donlon made clear, however, that the chambers are mandated to try crimes committed on the territory of Kosovo between 1998-2000, by or against anyone with Yugoslav or Kosovo citizenship, regardless of ethnicity.

A key task for her registry will be to help ensure the safety of witnesses, given allegations of threats and intimidation in cases related to Kosovo that came before the UN tribunal.

“We have taken all measures to ensure we can do everything possible to ensure the security and safety not only of witnesses, but others who might be at risk on account of their testimony,” Dr Donlon told The Irish Times.

“We can run protection if necessary and co-operate with states for relocation of people and provide support for vulnerable witnesses,” the lawyer added.

“Also, our judges can allow people to testify with face distortion, voice distortion and in closed session.”