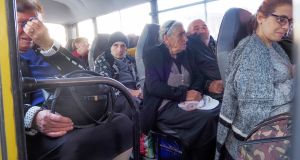 People sit in a bus as they prepare to leave Stepanakert, in the separatist region of Nagorno-Karabakh. Photograph: AP Photo

Armenia and Azerbaijan have held fresh talks on their conflict over Nagorno-Karabakh, as Baku claimed new territorial gains in the disputed region and Yerevan backed the deployment of Russian peacekeepers to the area.

The Azeri and Armenian foreign ministers met in Geneva on Friday with US, French and Russian mediators as shelling continued around Nagorno-Karabakh, where hundreds of soldiers and scores of civilians have died during a month of clashes.

Three attempts to implement a ceasefire agreement between the sides have failed and Azerbaijan – backed by chief ally Turkey – says that by force or through diplomacy it is now determined to retake control of a breakaway region that has been run by its ethnic Armenian majority since a war in the 1990s that claimed 30,000 lives.

Making use of high-tech drones bought from Turkey and Israel, energy-rich Azerbaijan has reclaimed swathes of territory in the region, and on Friday its autocratic president, Ilham Aliyev, announced the recapture of several more settlements.

A day earlier, the ethnic Armenian leader of Nagorno-Karabakh’s separatist administration said Azeri forces were within 5km of Shusha, a hilltop town with major strategic and symbolic significance that overlooks the region’s main city, Stepanakert.

“The enemy’s main goal is to capture Shushi . . . whoever controls Shushi controls Artsakh,” Arayik Harutyunyan declared, using the Armenian names for the town and breakaway region.

“In the next few days we need to reverse this situation at the front and punish the enemy right at the gates of Shushi. Let’s unite and fight together.”

Armenia accuses Turkey of fomenting the conflict and sending fighters from Syria to bolster the Azeri ranks, while Baku has acknowledged that several Turkish warplanes are on standby to defend Azerbaijan from any foreign aggression.

Ankara’s soaring influence in the strategic south Caucasus has irked Moscow, the area’s main power broker for a century. Russia has a military base in Armenia and a treaty obligation to defend the country from attack, but the Kremlin is keen to maintain good relations with Baku.

Russia would also like to avoid another confrontation with Turkey, with the two powers already backing opposing sides in conflicts in Syria and Libya.

“Moscow will fulfil its commitments in the event of a real threat to Armenia’s territorial integrity, including through military means,” he added.

Russian president Vladimir Putin called on Thursday for an end to fighting and talks to find a deal “that suits both sides”. Azerbaijan says the current format of negotiations – mediated by Moscow, Paris and Washington – has failed and Turkey must now play a major role in resolving the conflict.