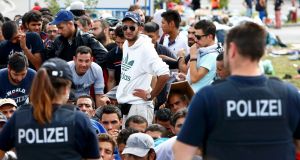 German police officers standing in front of migrants waiting to cross the border from Austria near Freilassing, Germany in September 2015. Photograph: Michaela Rehle/Reuters.

Austria hoped its Vienna meeting this week, effectively closing the Balkan Route to asylum-seekers would attract attention – and it succeeded.

But Vienna’s interior minister Johanna Mikl-Leitner’s hope for a “chain reaction of common sense” is still some way off after Greece – not invited to Wednesday’s talks – said on Friday she was not welcome in Athens.

After greeting leaders from Slovenia to Macedonia, Austrian foreign minister Sebastian Kurz said Greece was absent because, three weeks earlier in Amsterdam, “Athens made clear it was only interested in waving refugees on, not stopping them.”

But this Austrian initiative has annoyed German and European officials, too, coming a week after Austria announced it would accept just 80 asylum applications daily.

An incensed Greek premier Alexis Tsipras, in a first escalation step, summoned back for consultations his ambassador to Vienna. But Austrian officials remain unruffled, remarking they “could understand the tension in Greece, given the growing pressure to contribute to a containment of the stream of refugees”.

As provocations go, Wednesday’s meeting succeeded. But it succeeded, too, as the latest, poorly-communicated chapter in Austrian migration policy.

But Mr Faymann’s rush to action has left peeved Vienna feeling out of the loop. And it’s not yet clear if Austria’s daily asylum caps are even legal.

Co-host Mrs Mikl-Leitner is satisfied her Vienna meeting has increased pressure on Athens to give a noticeable return on the EU’s €380 million investment there to secure the outer Schengen border.

Slashing Austria’s 2016 asylum application quota by two thirds last week was a first step to force change. Effectively shutting down the Balkan Route was the next. Vienna’s risky calculation: only a big enough Balkan backlog will force agreement next month on an EU migration package worth the name.