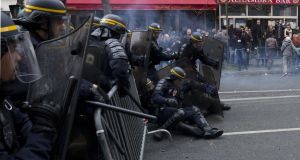 Members of riot police fall to the ground during clashes with protesters following a rally against global warming on November 29th, 2015 in Paris, a day ahead of the start of the UN conference on climate change (COP21). Photograph: Joel Saget/AFP/Getty Images

The acrid scent of tear gas pervaded Place de la République in Paris on Sunday after French riot police clashed with radical activists who had not been among the nearly 10,000 environmental demonstrators holding hands or linking arms along Boulevard Voltaire.

The boulevard, which runs straight as an arrow for nearly 3km from République to Place de la Nation, had witnessed much of the carnage inflicted by jihadist terrorists on Friday, November 13th, including 130 people killed at the Bataclan rock music venue.

The clashes began when some 500 Black Bloc anarchists and their associates started throwing bottles at the police, who responded with tear gas and truncheons in a determined effort to put an end to the violence. Later, they cleared the entire plaza.

The police had already used emergency powers to place 24 climate change activists under house arrest because of an alleged risk they would engage in violent protests during the Paris climate summit, which opens on Monday at Le Bourget, north of the city.

With a planned march prohibited for security reasons, activists found more creative ways to dramatise their demands for urgent action by world leaders flying in for the summit, including US President Barack Obama, to address the deepening climate crisis.

At dawn, hundreds of pairs of shoes were placed on the limestone paving of largely pedestrianised Place de la République, flanking the huge statue of Marianne, symbolising France itself, now festooned with floral tributes, candles, messages and posters.

“These shoes will march for us,” said campaign group Avaaz, which organised the almost surreal morning event.

UN secretary general Ban Ki-moon donated a pair of runners for the “sea of shoes”, and the UN press office issued a photograph showing them.

“Même pas peur” (not a bit afraid), a slogan draped on the Caen stone base of the statue, was also a theme of the day as a wide variety of people availed of the metro to make their presence felt on Boulevard Voltaire.

Riot police armed with automatic rifles took up positions on the route to ensure the march ban was not breached as families with children, elderly people and younger activists lined up informally and rather chaotically along the boulevard’s northern side.

Outside the Bataclan, which has become a shrine in memory of those who died on November 13th, the climate protest merged with large numbers of people who came to pay their respects and read the numerous messages left with flowers, wreaths or candles.

The multinational human chain extended for block after block, interspersed with activists with loudhailers, groups of cyclists with climate flags riding past and even some drummers. It did not, however, manage to fill the boulevard’s entire length at any stage.