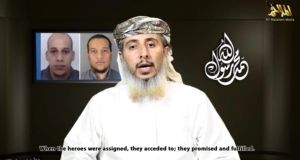 An image made from a video released on Wednesday by the Al-Malahem media which is affiliated with al-Qaeda in the Arabian Peninsula (AQAP). The image purports to show AQAP prominent commander Nasr al-Ansi claiming the group’s responsibility for attack on the French satirical magazine Charlie Hebdo. EPA/AL-MALAHEM MEDIA /HANDOUT 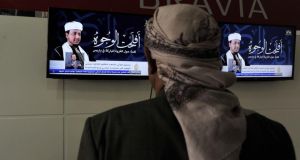 A Yemeni man watches news on television showing allegedly a picture of a senior member of the Al-Qaeda in the Arabian Peninsula (AQAP) in a TV shop in Sana’a, Yemen. Photograph: Yahya Arhab/EPA

Al-Qaeda in Yemen has claimed responsibility for the attack on French satirical newspaper Charlie Hebdo, saying it was for insulting the Prophet Mohammad.

In a message posted on YouTube Nasser bin Ali al-Ansi of the Yemeni branch of al-Qaeda (Aqap) said:

“As for the blessed Battle of Paris, we, the Organisation of al-Qaeda al Jihad in the Arabian Peninsula, claim responsibility for this operation as vengance for the Messenger of God.”

Hebdo sold out across France today, a week after the bloody attack on its offices.

The new magazine carries a front cover cartoon of a crying Prophet Mohammed in defiance of the gunmen who slaughtered 12 people at its Paris offices over its depictions of the Islamic spiritual leader.

Meanwhile, a man claiming to be the leader of the Nigerian Islamist militant group Boko Haram expressed support for the attackers who killed 12 people at the Paris office of Charlie Hebdo.

“We are very happy with what happened at the heart of France with the pains incurred on French people,” the purported leader of Boko Haram, Abubakar Shekau, said in an eight-minute video posted on YouTube that couldn’t immediately be verified.

“Oh you French people, oh you who follow the religion of democracy, between you and us is enmity to eternity,” said the man, speaking in Arabic and holding an AK-47 assault rifle. Three gunmen stormed the offices of weekly Charlie Hebdo in eastern Paris on January 7th.

Millions of people in France and across the world rallied in marches in the past week to show support for the victims and defend freedom of expression. Nigeria’s military has repeatedly claimed to have killed Shekau, and in October the authorities said they had agreed a cease-fire with the group.

Since then, violence in the mainly Muslim north has continued unabated. United Nations Secretary-General Ban Ki-moon said he was “appalled” at attacks last week in the northeastern Nigerian town of Baga near the border with Chad.

“Reports that as many as 2,000 people died in the assaults on Baga are unfounded, Nigeria’s military said, with initial evidence showing the death toll didn’t exceed 150.